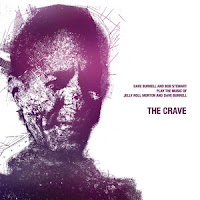 Dave Burrell will always be a marker of my first flirtations with the world of free jazz. Having seen the pianist’s 1969 Echo on a list of essential albums, I spent months haunting the corners of my local record store, foolishly hoping to come upon an errant copy. Even though I finally gave in and downloaded the album on Amazon for less than the price of a cup of coffee (my introduction to one of the free jazz world’s more disconcerting aspects), and even though the album didn’t end up speaking to me the way some of the other early classics on the aforementioned list did (Noah Howard’s Black Ark, say)—Echo is still an album I use to measure out the distance I’ve traveled as a listener. Which is part of the reason I’ve so enjoyed the chance to cover The Crave, released this past year on NoBusiness and miles away from Echo. Yet as I take a new step forward with Burrell, he’s in a sense looking back: The Crave is a swinging, swaggering, and singing set of tunes, three by Jelly Roll Morton, three by Burrell himself. Joining Burrell in the fun is Bob Stewart, whose tuba not only bolsters the New Orleans flavor of the music but also speaks in its own equal voice.

When Burrell and Stewart recorded these tracks, way back in 1994 live at the Kölner Stadtgarten, Burrell had already spent some time dabbling with Morton’s music, in particular “The Crave”—notably on 1991’s The Jelly Roll Joys, a solo album—and would again later with David Murray on Windward Passages (1997) and bassist Tyrone Brown on Recital (2001). Listening to Burrell and Stewart’s interpretation of “The Crave,” it’s no wonder the pianist can’t help coming back to the piece. With Burrell’s delicately tantalizing right-hand work underpinned by Stewart’s push-pull bass line, Morton’s tango is every bit as moody and seductive as it should be. If the album’s remaining two Morton compositions, which occupy side B entirely, don’t quite match the opener in infectiousness, they certainly do in listenability—the moseying “New Orleans Blues,” featuring a colorful and nimble solo by Stewart, and the dark closer, “Spanish Swat.”

Burrell’s original compositions complement Morton’s nicely, adding variety while maintaining a playfulness and melodicism. “Popolo Pianolo” oscillates rapidly between jagged unisons and half-time plods before launching into an uptempo swing, the tuba grounding each new shift. On “I Am His Brother,” meanwhile, it’s Burrell who lays the foundation, a restlessly drifting fog through which Stewart’s lyrical lead cuts. And with “Pua Mae ‘Ole” Burrell returns to Hawaii, again handing the melody over to Stewart, who delivers it in all its heart-aching beauty.

Whether you’re a fan of Echo or Burrell’s later work—or especially if you’re both—The Crave is a delight well worth visiting and revisiting.