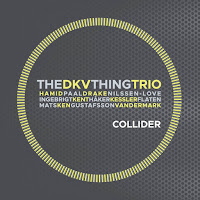 Fans of the Thing and DKV Trios have been hoping for a joint project for a long time.  Despite the fact that these musicians have collaborated in various permutations on a host of recordings, the two trios had yet to appear together as a group on any records that I’m aware of.  We came close a few years ago with the outstanding Schl8hof, which comprised all of the DKV Trio (Ken Vandermark, Kent Kessler, and Hamid Drake) and two-thirds of the Thing (Mats Gustafsson and Paal Nilssen-Love), with Massimo Pupillo instead of the Thing’s Ingebrigt Håker Flaten on bass.  But here we have all six, and they are indeed in top form throughout.  This record gives us three extended, high-energy, in-your-face collective improvisations that manage to remain both fluid and open-ended yet at the same time grounded in addictive rhythms and grooves.  It’s just what we expect from each trio individually, of course, but with the “collision” between the two referred to in the album’s title we get even more of it.  And that’s cause for rejoicing.

The music was recorded live at Manggha Hall in Krakow in November 2015.  The crowd is barely audible (I can only hear the audience, very faintly, on a couple brief moments of the record), which is too bad, as it’s hard to imagine any audience sitting still or remaining silent during music this forceful.  I’m sure those lucky enough to see this performance were blown away by it.  From the opening few seconds of the first track, “Cards,” which charges right out of the gate, Vandermark (who plays tenor and baritone sax, as well as clarinet) and Gustafsson (who also plays tenor and baritone) provide a sonic blitzkrieg, with Vandermark’s penchant for short, jazz and funk-inflected phrases running up against Gustafsson’s irrepressible effort to push his instrument to the breaking point.

There are a few stretches of relative calm—but those often seem present merely for biological necessity, as Gustafsson and Vandermark save their physical energy for the next onslaught, which is never long in coming.  Meanwhile, Håker Flaten and Kessler complement each other perfectly in holding down the bass duties, consistently avoiding redundancy, sometimes with one going to arco while the other uses ostinato phrases to keep the pieces moving and to give them melodic direction.

And as for drummers Drake and Nilssen-Love, what can be said that hasn’t already been mentioned about their ability to combine freedom with rhythmic structure?  Each is a master at maintaining steady pulse and creativity, and to hear these guys side-by-side is a treat.  Like Håker Flaten and Kessler, they avoid cluttering the music, managing to stay in close rapport while making room for the other to contribute equally to the collective sound.

A special acknowledgment should be made of Rafal Drewniany, recording engineer for Not Two Records, who did an outstanding job documenting this performance.  Although I would have loved to hear more of the audience, one can’t fault the clarity of the music itself.  With the Thing Trio arrayed in the left channel and the DKV Trio in the right, it’s the perfect opportunity to hear the trios working individually and in tandem, and it’s easy to pick each musician out of the mix to hear their distinctive roles.  An especially fine recording for headphones!

A staggering, often exhilarating record: it’s wonderful to finally hear all six musicians together at the height of their powers.