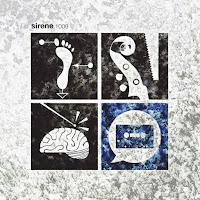 Sirene 1009 is a newish band featuring Han-earl Park (guitar), Dominic Lash (double bass), Mark Sanders (drums), and Caroline Pugh (voice and tape recorder). Their first album is being released at the end of January through Park’s Buster and Friends label. If you don’t want to read the rest of this review, the short version is: buy this disc. Now.

There are few bands that cross as much territory as this one does. From thrashing, spastic aggressive riffs that put most punks to shame to explorations of the quietest of spaces in-between thoughts, Sirene 1009 is a fierce, adventurous band that goes where most bands don’t: into the unknown, fearlessly in search of the new.

Park’s guitar is a central component of Sirene 1009’s sound, sounding less like a typical guitar and more like the inner monologue of a cyborg slowly coming to terms with having a consciousness. Lash’s bass provides a firm counter-point to the proceedings. Rarely assuming a traditional support role, making extensive use of what many would consider extended techniques (though they are such a normal part of Lash’s arsenal it seems strange to refer to them as extended), and a wonderful sense of dynamics Lash is a supremely engaged participant. Sanders drums like an octopus, one with great ears and extraordinary taste, squeezing through the gaps left by the other members. At times, it is almost incomprehensible that he only has four limbs.

Despite the excellent contributions of the other three, the stand out star is Caroline Pugh. Vocals in free music are notoriously difficult to pull off successfully, perhaps more so than any other instrument. Her vocalizations run the gambit from simple syllabic squeaks to animalish noises to full sentences. Pugh is radically aware of the microphone and how her voice interacts with it. Her tape recorder/electronics are used rarely (I think) but to great effect, most obviously in “Cliodynamics II.” A veritable master class of what the human voice can contribute to this kind of music.

My favorite tracks are the middle three, “Cliodynamics I-III”, which, together with “Hopeful Monsters,” was recorded live at the venerable Cafe Oto in London. The first and last tracks were recorded in a studio in Birmingham.

Don’t expect the band to hold your hand. There isn’t any way off once they take flight. Go along for the ride. If you bail out mid-flight you’ll just end up another D.B. Cooper, lost to time, never to be found again.

Pre-orders come with an equally interesting, through fairly different, album. Kuramoto Synchronization features the trio of Park, Lash, and Pugh. Recorded live at University College Cork, this album alone is worth the price of Sirene 1009. Think of it as a twofer: two great albums for the price of one. An exquisite exploration of space, time, nightmares, and dreamscapes. I like this one even more than I like Sirene 1009.

Thanks very much for the kind words, and thanks for listening!

Shucks, what a lovely review! The band is a joy to play with, so I'm glad you enjoyed listening to us.