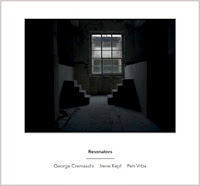 Kepl initiated the trio with American, Prague-based, double bass player George Cremaschi and Czech trumpet player Petr Vrba (who have worked together as the Los Amargados duo and in a trio with Berlin-based contrabass clarinet player Chris Heenan), organizing a series of concerts in a Viennese church with unique acoustics. The trio decided to continue investigating how the timbral qualities of their acoustic instruments, enhanced by subtle amplification and feedback devices, evolve in similar highly reverberant spaces.


Resonators was recorded in unusually resonant, old stone buildings in the Czech Republic on a four-days tour in June 2015. Each of these spaces - The small, 13th century St. John Baptiste church in Prague, The 14th monastery in Roudnice nad Labem and the 15th century monastery in Bechynět and the 17th century hall in the former summer palace of a royal family, Valdstejn Loggia in the Jičín region - had its distinct acoustic characteristics, critical to the use of amplification and feedback. The four pieces on Resonators emphasize patiently different musical ideas - vibration, duration and resonance,, enabling the three musicians to to abstract these ideas with their own personal languages.


Cremaschi “Affective Labor” stresses the kinetic and elastic qualities of the amplified sounds,  enhancing the acoustic instruments resonating qualities in the reverberant space, creating continuous layers of multiplied, interlaced overtones that become deeper and deeper. Kepl “Soma” employs the trio loose interplay to suggest gentle waves of sounds, patiently echoing each musician gestures. Vrba “Locus Resonatus” is the most intense piece. Each sound is mirrored in the other musicians output, methodically reflected and multi-layered in the room ambiance while the trio interplay gains more momentum, density and powerful, almost orchestral, intensity. Kepl short “Pirol” is the only piece that highlights the trio immediate, free-improvising sensibility as all three musicians explore parallel ideas in the resonant space.


An arresting musical journey that keeps resonating on and on. 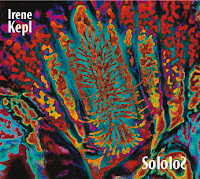 Kepl adopts American post-modernist choreographer-dancer Trisha Brown advice to frame her own aesthetics: “Dancing on the edge is the only place to be”. Kepl debut solo violin album explore edgy terrains of playing the violin or playing with violin. Kepl summarizes on SololoS her past years experiences of the of playing solo violin performances - interpretations, composition and free-improvisation. Kepl follows, even loses herself, within the violin timbral colors, uses her voice to enhance the instrument colors, plays, game-like, with subtle feedback, conquers the space, feels the resonating sounds of the violin in her body and creates multi-layered overtones.


The 12 pieces of SololoS were recorded on one day on March 2016 in the Northern suburb of Paris La Garenne-Colombes, offer her highly-personal, rich and commanding language.. She investigates the timbral spectrum of the violin with extended bowing techniques on “Here Is the Thing” or the effect of repetitive-minimalist texture on “AmiNIMAL”; searches microtonal sounds on “Move Across”; explores how the intense bowing or scratching the strings correspond with the recording space on “Lucid” or how her voice extends the violin and vice versa on the quiet “Candid” and stormy “Apogee”. She even sketches playful songs on the twisted “forget-me-not” and the ironic “Walzer On The Roof” and revisits her musical roots on “Bacino”.