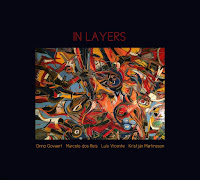 Reading deeply into album titles may not be the strongest critical practice, but there surely are resonances between the music, titles, and art of In Layers. Luís Vicente and Marcelo dos Reis have cultivated an aesthetic across several groups – notably Fail Better!, Chamber 4, and FRAME Trio – with a strong sense of space, evoking both openness and an awareness of form, of how each musical layer coheres into larger conceptual structures. There’s more than a glimmer of that aesthetic here, though In Layers also pushes into regions of tension and density, spaces closing rather than opening, tightening into tunnels of sound.

Much of this energy and intensity is brought by Amsterdam-based musicians Onno Govaert (who plays with Vicente in Twenty One 4tet along with Cactus Truck cohort John Dikeman) and Kristján Martinsson (a pianist who has led both Icelandic and Dutch versions of his K tríó). Though far more subtle than Cactus Truck, the music on In Layers is often driven by Govaert’s direct drumming style, which even in nuanced moments has a rock ‘n’ roll sure-handedness. Tracks like “Fresco” and “Pentimenti” build and sustain crescendos, alive with the no-hesitation forward motion of juggling or walking across beds of coals. These are some of the most restless contexts in which we’ve heard dos Reis, and on “Fresco” he locks into a repeating figure that becomes the pivot the rest of the band surges around. In nearly every situation, what’s most refreshing about dos Reis is that he never sounds like a “free improviser”—his musical decisions are considered, even simple, willing to risk one bold note rather than twenty unconvincing ones.

Thrilling as the more energetic pieces are, the moody, introspective tracks are In Layer’s strong point. Opener “Glaze” eases into being, Vicente as quiet and intense as a held-in scream. He has become a player of truly formidable technique, his granular, textural palette recalling players like Nate Wooley or Peter Evans. Elsewhere, “Varnish” is an antique shop in the dark, all dampened piano and guitar strings, gonging cymbals, and Vicente’s creaking muted trumpet. “Underdrawing” closes the album in the same unbounded mode as “Glaze,” somehow both open and claustrophobic, centering on some bluesy guitar as the other instruments begin to thin, layers peeled back one by one, or, as in a vast desert, strata of dust being stripped by the wind.