We're working our way through the combinations - recently we had solo, duo and trio weeks, and this week we check out some larger than average bands, starting with one that has been waiting far too long for a review on the Free Jazz Blog... 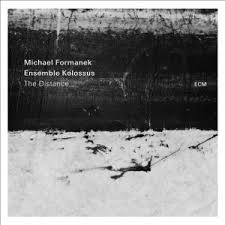 Baltimore-based bassist and composer Michael Formanek has a concise but impressive list of recordings as a leader, including Rub and Spare Change (2010) and Small Places (2012) on ECM, and a very impressive list of recordings as a sideman. He was most recently mentioned on the blog with the group Thumbscrew, with guitarist Mary Halvorson and drummer Tomas Fujiwara, who also are a part this powerful big band recording from early 2016. The Distance is not only a new notch in the bassist's discography, but an incredible showcase for his compositional prowess, and a sumptuous listening experience for the rest of us.

This review is nearly a year late - The Distance was released around this time in 2016. As winter turned to spring, summer, and fall, it continued to 'ripen' on my harddrive. When I finally cleared away all the other music to give the Ensemble Kolossus due listening, it somehow was winter again. While I kick myself for waiting so long, I can only say the music is timeless. This album is a gorgeous big band recording that embraces a sound that only a large ensemble can bring to life with its orchestral voicings, imaginative solos, unusual song structures and clever references to the big band genre.

The album begins with the unhurried title track. Formanek displays the rudiments of his sound - long flowing chords that move gracefully from phrase to phrase. There are few individual voices here to start, instead, we hear a flowing and dramatic melody delivered by the ensemble (see a list of all participants below). A lovely saxophone solo emerges from the soothing waves and then is subsumed again. Next, we move into the 'Exoskeleton' suite ...

The prelude begins with a similar gentleness but soon reveals a deeper pathos. To start, Formanek is out front with a plucked solo passage which is then joined by a flute and clarinet playing a legato refrain. Tension is built out of austere sonic surroundings. 'Exoskeleton (parts IV - V)' take a different approach. A cool jazz introduction states the melody and loops along at a comfortable gait, the score interweaves the horns nicely, and the first solo a trumpet takes the lead in ramping up the intensity. The melodic interlude between soloists, the guitar comes to the fore next ushering in a high tide of activity, musical waves cresting, overlapping each other, and then receding. When the guitar solo begins, the approach has changed, and for a bit the large group mostly drops out, leaving it to just the drums and piano to underpin the staccato guitar lines.

The piano takes the lead spot in 'Exoskeleton (parts VI - VII)'. The ocean has grown choppy, too. The accompaniment comes in short urgent bursts, and soon the clarinet moves into the solo spot, dropping in quick melodic lines. The final movement, 'Exoskeleton (part VIII)' is a short but effective summation of the suite. Its start is almost chaotic, the many voices in the group playing freely, but they're power is soon directed into an intense swirl of color and texture.

Formanek's The Distance is a delight, so easy to get caught up in and swept away. It begins with a deceptive gentle swell but the undertow will drag you into its heaving and churning depths.