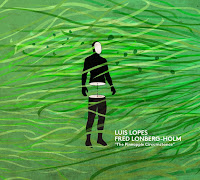 Lopes and Lonberg-Holm were recorded in Lisbon on April 2015, playing five untitled free-improvisations. Lonberg-Holm expands the cello's sonic envelope with assorted effects and pedals while Lopes employs his inventive, extended techniques on his effects-laden electric guitar, both transforming this duo into a much bigger sonic entity than just two musicians who play stringed instruments.

The five pieces are poetic and free-associative soundscapes that offer strange and psychedelic universes. On the first two pieces, Lopes and Lonberg-Holm sketch fragmented, kaleidoscopic colors on a huge constantly-shifting canvas, patiently varying the nuanced and expressive textures with deeper and deeper layers of sounds. The tense and intense “III” introduces a whole different atmosphere, chaotic and dense one as the two investigate series of distorted broken sounds. “IV” resumes the previous, abstract vein, but adds tougher and darker shades to the dense texture. “V” suggests a brutal, explosive drone, full of weird, arresting noises, all emphasizing the intuitive and deep affinity between Lopes and Lonberg-Holm. 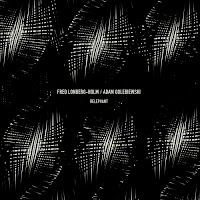 Lonberg-Holm has collaborated before with Gołębiewski - a percussionist and musicologist who has collaborated before with Gustafsson, American guitarist Thurston Moore and Catalan pianist Agustí Fernández - in an ad-hoc, free-improvising quartet that featured fellow Polish musicians, clarinetist Piotr Melech and pianist Witold Oleszak (Divided by 4, Multikulti, 2012). Their debut album as a duo was recorded at the Dragon club in Poznań on May 2013.

Lonberg-Holm alternates between the cello and electronics and Gołębiewski adds various objects to his arsenal. The four ultra-dynamic and urgent improvisations are focused on weird and complex sonic frictions and extremes. The two sound as enjoying this game of brutal collisions, much louder and noisier than what you expect from a duo of drums and cello.

“Obviously in the room” contrasts the hyperactive, distorted bowing of Lonberg-Holm with the equally restless, industrial-metallic, fractured percussive patterns of Gołębiewski. The short “Disguised” is a looser piece, sounding like a chaotic soundscape of weirder and even weirder noises. “Being run around inside” is the most structured piece, Lonberg-Holm and Gołębiewski patiently cook an intense, spicy stew, while both explore close, resonating sonorities, noisier, even abstract ones, until the cathartic climax. The last “Meeting three blind people” is a surprisingly restrained and cinematic piece, one that highlight the complementing improvisation strategies of Lonberg-Holm and Gołębiewski.