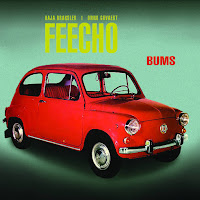 
Kaja Draksler’s been on an incredible run in the past couple years, releasing solo, duo, and trio albums in quick succession. Draksler is already well known to regular readers of this blog. Several included her duo album with Susana Santos Silva, This Love, on their best of 2015 lists, and it was a near-miss for mine. Draksler is phenomenally innovative, approaching the entire piano as a single instrument, moving effortlessly between keys and strings.

This time around, she’s in a duo with Dutch drummer Onno C, another rapidly rising star, having performed with Peter Brötzmann, John Dikeman, Dave Rempis, and others. I read somewhere that Govaert is a “post-Jim Black” drummer, which is a pretty apt description. He reminds me of Tom Rainey and Chris Corsano a bit, as well, and all four take a more melodic-percussion approach to the drum kit, which adds a tremendous degree of depth to their improvisation. Together, Draksler and Govaert are Feecho, named for the type of Slovenian car illustrated on the front of the album. If the name and art signify anything, it’s the the surprising degree to which both seem comfortably relaxed in their interplay.

Bums captures the two in a freely improvised performance, broken into three pieces, “Goshi Goshi,” “Nya,” and “Bums.” Beginning with a frenetic improvisation, “Goshi Goshi” goes to some sonically interesting places around the halfway point. Draksler coaxes some sounds from the piano that sound nearly electronic, and Govaert plays expertly with the dynamic range of the kit. “Nya” starts off more contemplatively, with Draksler playing a slow motif, while Govaert counters on cymbals. Around the midpoint, Govaert takes the lead with a thrilling solo, Draksler punctuating his solo with ringing atonal chords and gradually taking center stage for the final minutes. The last track, “Bums,” starts off with another flurry of activity, with Govaert all over the set. Draksler settles into a circular melody, which she repeats as the tension gradually builds. They finish in a dramatically satisfying run that gently fades to completion over the course of several minutes.

Piano-drums duos are typically pretty exciting, made even more exciting by the musicians’ synchrony. Draksler and Govaert have a lot to offer, but they are particularly notable for how closely in sync and style they are. It looks like they’ve been touring and playing together. Hopefully, it won’t be long before we get the next album from this duo.