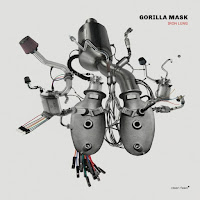 My mother, to this day, still has horrible recollections of growing up in a very small town on the east-coast of Canada when polio was sweeping its way across the continent. It wasn’t the disease that had her terrified, it was the cure. She had seen the worried, crying and seemingly disembodied heads of children her age sitting inside this steel medical contraption; this Iron Lung. Still vivid some 60 years later.

So it was on this premise that I started listening to the cure, Gorilla Mask’s Iron Lung. And times have changed, some two generations later, I relish feeling better already.

Peter Van Huffel (alto saxophone), Roland Fidezius (electric bass, effects) and Rudi Fischerlehner (drums) come straight out of the gate with a driving complex tune that screams, not only with the Gorilla Mask intensity, but also a new layer of maturity. 'Hammerhead' combines the sleekness of truncated rhythms mixed with freer jazz interludes which rarely gives your ears time to get a grasp of which direction they are heading in. This is followed up with 'Before I Die', which Fidezius’ bass sets the tone and becomes the foundation of the track as it pounds through the tune. It starts with a fist shaped pick and slowly evolves into a reggae grove with some harmonic effects added for good measure. Huffel enters with a note like he is stabbing a flag into a newly discovered land. This is sounding like a band who have played together for some time and are confident in what they want and how it should sound as this record is produced by Huffel himself.

The record is a real juxtaposition between hard driving punk inspired riffs on tracks like 'Thump!' and more subtle statements like 'Crooked', where Fischeriehner brings a different side of his playing and Fidezius introduces us to his bag of electronic tricks. It is this diversity that adds to their mature sound. Then enters 'Blood Stain' that is a combination of both of these principles.

Iron Lung sounds like a book of chapters that need to be read in order and carefully. Once you do, the novel becomes something bigger, a testament to a band hitting their stride and looking more and more into the future. So let the big iron machine force open your chest cavity and let it fill up with air because you will need it when you sing along with this one.

Here is a great example of their sound: