“Remember, freedom is a work in progress”, recites Joe McPhee on his duo album with French flutist Jérôme Bourdellon. He is clearly referring to the American political climate, both historic and current, but McPhee's poetic insight is also relevant to the art of free improvisation. These three recent releases from McPhee, with old comrades and heroes of this unique art, stress the profound caloric content of the encounters between long standing collaborators. It is the just and right music for these wrong times. 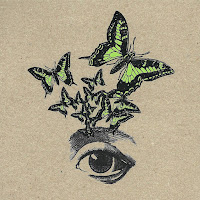 McPhee began his collaboration with French sax player Daunik Lazro at the beginning of the nineties. They recorded as a duo (Élan, Impulse, In Situ, 1992), as the A.M.I.S Quartet with fellow McPhee collaborators French flutist Jérôme Bourdellon and reeds player André Jaume (For Frank Wright, Label Usine, 1994), as a sax trio with Evan Parker, self-titled release (Vand’Oeuvre, 1996, and Seven Pieces (Clean Feed, 2016 - reviewed below), as the Lazro Quintet (Dourou. Blue Regard, 1997), and again as a quartet with another McPhee collaborator, guitarist Raymond Boni (Next To You, émouvance, 2006). The Cerkno Concert was recorded live on May 2016 at the Cerkno Jazz Festival, Slovenia.

Joe McPhee plays the pocket trumpet, alto sax, and sings. Daunik Lazro plays the baritone sax except from one piece where he plays the tenor sax. The six improvisations and a McPhee only composition, “Voices for Alto and Tenor” all highlight the rich, resourceful language that these masters share. Both enjoy the intimacy of the duo format, exploring sounds and shifting dynamics. McPhee and Lazro let their breaths converse and sing gently, blossom organically, and fly away, patiently gravitating into an abstract theme, even a subtle melody, or a light swinging rhythmic pattern. The set reaches its emotional climax with “Remembering Ornette Coleman and Albert Ayler (in a caravan of dreams given form)”, this last piece not only pays homage to these great forefathers of free jazz but demonstrates how their ideas are still relevant and invigorating with a brilliant quote of Ayler’s “Ghosts”.

Beauty is a rare thing and The Cerkno Concert is the real thing. 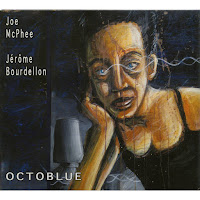 After the McPhee and Bourdellon collaboration in the short-lived A.M.I.S Quartet, they continued to work as a duo and recorded Novio Iolu - Music For A New Place in 1998, followed two years later with Manhattan Tango, recorded at Alain Kirili's loft in Manhattan's Tribeca (both albums also released by Label Usine). Octoblue was recorded on November 2012 at Culturel Center Pablo Picasso in Blénod-lès-Pont-à-Mousson, North-Eastern France. Octoblue features McPhee's poem “Eroc Tinu”, written after a concert of pianist Cecil Taylor on April 28, 1979 in New York. The title of the poem is the palindrome of Unit Core, the name of the label created by Taylor, when he could not find a label to produce his music at that time. The album also draws inspiration from the tragic history of the Africans who were brought to America as slaves and the opening piece, “Deep See Dancers”, refers to incidents where slaves were thrown from ships because they were sick or injured.

Bourdillon plays on octobass flute, bass flute, c flute, piccolo and bass clarinet. McPhee focuses on the pocket trumpet, plays the Bb clarinet on one piece, vocalizes and recites his poetry. Their interaction is immediate, urgent, and profound, playing like a restless, two-headed entity. Bourdellon's experimental, extended breathing techniques trigger McPhee to mirror these sonic searches with sympathetic sonorous explorations with his pocket trumpet and clarinet. Bourdellon and McPhee transform their instruments into generators of fascinating and abstract breaths and winds sounds, creating quiet storms in a bucket of water and suggest meditative drones. McPhee adds moving blues chants and recitations as if he was a monk from the Far-East. The two even offer an update to the Marxist anthem 'The International' on “International Spirit”, much more stormy and intense version than the original one, and play a heartfelt tribute to the late pianist Borah Bergman, with McPhee playing a toy piano. 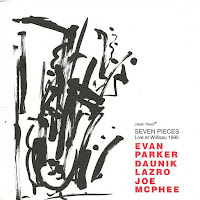 The sax trio of Evan Parker. McPhee and Lazro performed in France, Germany and Switzerland in the mid-nineties. Unfortunately, just one recording documented this master trio, a self-titled live album that was released in 1996 by the French label Vand’Oeuvre. Seven Pieces was also recorded live, six days later after the the recording of the first album, on May 19th, 1995 in Willisau, Switzerland, and recovered recently from an old cassette, containing two sets from this concert, by French recording engineer (and electronics musician) Jean-Marc Foussat.

Parker and McPhee have collaborated before, recording two duo albums, Chicago Tenor Duets (Okka disk, 2002) and What If/They Both Could Fly (Rune Grammofon, 2013). Here Parker plays tenor and soprano saxes, Lazro the alto and baritone saxes, and McPhee the alto and soprano saxes, alto clarinet, and pocket trumpet. The three sound inseparable, dancing closely around each other on the emotional, reflective “Echoes of Memory” and the more muscular “Tree Dancing”, chatting like ecstatic birds on “Broadway Limited” or sketching a gentle, minimalist ballad on “Concertino in Blue”, making it impossible to tell who play what. The duet of Parker and Lazro “Sweet Dreams of Flying”, and later Parker solo, “Florid (for G.L.)”, with a masterful usage of circular breathing, already emphasizes their distinct voices, Parker's more serpentine yet structured one, while Lazro's is more free associative. McPhee’s playing of the pocket trumpet on the last, “To Rush at the Wind”, charges the trio subtle interplay with an urgent, wilder tone, inviting some Aylerian cries and shouts,

More than twenty years later, these pieces still sound fresh, relevant as ever.