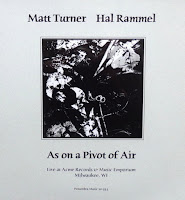 As on a Pivot of Air is a 10" vinyl gem that snuck out into the wild late last year. The record is a fascinating soundscape featuring Amplified Palette inventor and player Hal Rammel and cellist Matt Turner. The opener 'The Windows are Frameless' sees the duo ensconced in calm, the atmosphere accentuated by creaks, clops, and double stops. The second track, 'Opening without Glass' takes the same sounds but amplifies and accelerates them. There is pulse, a breath, and a melodic sense brought about by the intersection of the unusual instrumentation and Turner's versatile playing.

The first side is over too soon, but side two starts with 'Outlines Grow Shadowy', which features upbeat repeated figures from Turner, and Rammel responding with percussive clatter and resonant plunks - in a sense, his instrument is like a prepared piano, but at the same time, it is not like a piano at all. The track ends in a frenetic friction-full climax led by a sawing cello. 'Out of the Glowing Haze' ends the album in a more subdued manner. Rammel uses the Palette to generate a percussive foundation for Turner's muted scrapes, while a vaguely menacing 'wind' like sound fills the air around them.

As on a Pivot of Air is a fascinating and accessible document of the beauty that can be found in extended techniques.

Check out the video below to see an Amplified Palette in action: