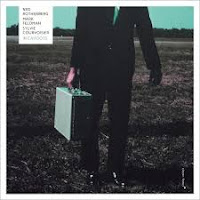 Husband-and-wife duo Sylvie Courvoisier and Mark Feldman have a long musical history, appearing in several projects together over the years (including their wondrous entry into Zorn’s famed Book of Angels project). As such, seeing their names together on an album’s credits should be enough to excite any fan of improvisational jazz - with a past discography as extensive and interesting as theirs, you’re bound to get something that’s, at the very least, compelling. Joining them on this latest effort, titled In Cahoots, is Ned Rothenberg, who brings his mastery of various instruments (clarinet, alto saxophone, bass clarinet, and the Japanese shakuhachi) to the proverbial table. The result is a recording that entices, intrigues, and continuously keeps the listener on their toes.

For that latter sensation, one need only listen to “Inter-State,” a piece that roars along with all the inexorability of a freight train, before reaching a conclusion that roils quietly beneath the weight of what came before. Otherwise, most of the pieces here are slow burners, taking their time to unfold and reveal themselves to the listener. The opener, “Light and Variable Sins,” features a gradual stirring from each of the players - ethereal twinkling from Courvoisier, a series of hesitant plucks from Feldman, and Rothenberg’s searching alto, all of which eventually develop into more complex modes of expression. “Epic Proportions” is where the magnificent sense of interplay between the musicians starts to become more readily apparent; Courvoisier acts as the glue of the group, producing rhythms and textures that, while not terribly straightforward themselves, serve to hold the more abstract wanderings of Feldman and Rothenberg in place. Feldman, as always, is a pleasure to listen to, moving from high-pitched wails to muted figures that are best compared to ripples in a still pond, slowly pushing outward. Likewise, Rothenberg slides through a variety of articulations, constantly surprising with his ability to wrench such a wide-ranging set of timbres and tones from his instrument. He brings that same sensibility to the Japanese shakuhachi, which is played to great effect on the brief, swirling “Shudder to Think.” The longest piece is the self-titled track - at thirteen minutes, it features the trio at their most playful and conversational. Here, Courvoisier seems intent on being as slippery as possible, wiggling her way through tightly-wrought clusters that bubble up, bounce about, and break apart into vibrant splotches of sound. On bass clarinet, Rothenberg dips into melodic streams that are substantially different from those he sticks with on the alto: he’s downright mischievous, gliding through scales with all the alacrity of a squirrel. On another long-form piece, “Dark Shimmers,” Rothenberg’s bass clarinet takes a turn towards melancholic introspection, Feldman provides a mournful underpinning, and Courvoisier’s notes drop like dots of bright ink on an empty map.

In Cahoots is a musical shadow-lantern of sorts, casting all manner of impressionistic images onto the mind of the listener. Because of the tight connections between the players, their inventiveness, and the way the lines they produce seem to spool around one another in perfect sync, one would be forgiven for thinking that the pieces here were meticulously composed. With musicians like Ned Rothenberg, Mark Feldman, and Sylvie Courvoisier, however, efforts at composition could only serve to diminish their vision - the real beauty here lies in the ties between players that are truly, undoubtedly, “in cahoots.”