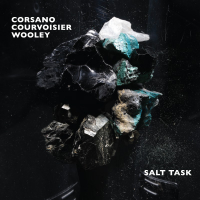 A large portion of what these three musicians need to say to each other either happens or is alluded to in the first 10 minutes of the opening track, the record’s namesake, Salt Task, which sets the gears in motion for a journey full of secret handshakes, nods, winks, smiles and ultimately a full album’s worth of discovery as these three gifted musicians sit down for an evening of improv.

Sylvie Courvoisier (Piano) runs the gamut of sounds that can come out of a piano from fingernail shattering percussive hammering to passages that evoke nursery rhymes throughout the opening track to delicate introspective runs in 'Last Stat' (Track Two) to plenty of prepared movements on 'Tall Stalks' to even what could pass for a strummed acoustic guitar on the albums closer, 'Stalled Talks'. There are often times when she is the glue that keeps this project together especially when Wooley and Corsano really go for it.

Then there is Nate Wooley. Without burning through another thesaurus, trying to describe the sounds that one man can squeeze out of a piece of brass, Wooley as with Courvoisier, can turn on a dime and alternate between rich melodic passages and extended technique often in the same measure. Depending on the track, 'Salt Task' for example, he combines with the piano in such a way that sounds like a falling airplane with screaming passengers audible throughout the horrible descend.

Chris Corsano is the wild card here for me. After listening to the album a few times, I realized that Corsano had slipped through the cracks. With a re-evaluation of my focus, he jumped into the forefront and ran with it. On 'Tall Stalks', he sits out for a few seconds and slowly enters with thunderous rolls and an equally delicate hand on the cymbals. The sheer speed that he generate on this track is stellar. Highly listenable on is own, he still becomes the edges of the puzzle that everything else eventually fits into.

So there are the parts of its sum. The sum of its parts is the weaving of these minds, lips, fingers and techniques that produce a very enjoyable listen indeed.
Paul on Tuesday, February 21, 2017
Share