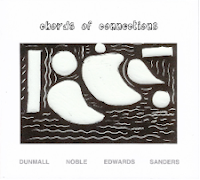 This time we have Dunmall on tenor and soprano saxophones, Liam Noble on piano, John Edwards, double bass and Mark Sanders, drums. Even if you have only a passing interest in free jazz, the latter two need no introduction. Noble, who also holds posts as lecturer at Birmingham Conservatoire and Trinity College of Music, is best known on the blog for his work with Ingrid Laubrook’s Sleepthief and her Octet. In these performances, his contribution is telling, with a supple, pliable touch, adding splashes of colour to Dunmall’s earthy tone, underlining with sensitivity, and protracting and paraphrasing to maintain a distinctive flow of ideas.

The album title is interesting. Musical chords, a pun (“cords”), possibly a mathematical chord (a line connecting two points on a curve). All suggest linkage and interrelations, both known and undiscovered. On occasions, we can hear a shared harmonic framework and the exchange of melodic information, sometimes no more than glances. There are also common patterns, motions, currents and strata, absorbed and rebounded, expanded and contracted, constructed and dissolved – processes mirroring our own activities and the teeming world about us – giving the music a sure-footedness and continuity that it’s difficult to put into words, and the result of a serious level of engagement from four experienced improvisers for whom such matters are second-nature.

‘Part 1’ is also informed by uncertainty and deliberation – tentative gestures and brief agitations that consolidate around Dunmall’s robust tenor as the quartet opens up and hurtles forward, with such velocity that the saxophone line becomes a swarm of notes. At the other end of the scale, Edwards’ dense, buzzing bass is opened out, to reveal its grainy textures in detail. The piece concludes boldly with Dunmall’s soulful saxophone playing a sketchy memory of a ballad, eventually encompassing his whole range, both in register and dynamics. In ‘Part 2’ there’s an emphasis on collaborative melding. During a long passage, Dunmall’s gull-like soprano – a continuous, elaborative trace – swoops and dives over the vast, undulating waves of piano, bass and drums, finally coming to rest with soft burrs.

‘Part 3’ is a world in almost perpetual transformation: sparse, half-formed thoughts and distant associations crystallising into tenor and piano threaded together, then pared down to abbreviated quacks and spasms. The elements begin to reform into new configurations but the assembly is only partially complete when the piece finishes, not so much with a full stop as a question mark. Improvisations such as this, drawing on regenerative cycles, never really end.

The performances were recorded at Birmingham University in January, 2016. Here’s the quartet from the Vortex, the previous September.