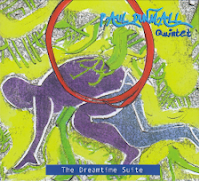 Although originating with Duke Ellington, and not unique to Britain, there is something of a local tradition of jazz suites for large and small ensembles, going back at least as far as Stan Tracey’s Jazz Suite (Inspired by Dylan Thomas’s Under Milk Wood) and Joe Harriott’s Indo-Jazz Suite. Often written to commission, such works were continued by, amongst others, Graham Collier, Mike Westbrook, Neil Ardley, Michael Garrick, Kenny Wheeler, John Surman, Elton Dean, Mike Gibbs, Paul Rogers, Colin Townsend and Barry Guy, even John Stevens’ Spontaneous Music Ensemble (The Source - From and Towards (Tangent, 1971)). Paul Dunmall has also written works in this genre for his Octet and Sextet, and now we have The Dreamtime Suite, performed at the Lantern Rooms in Bristol in October, 2016 by a group consisting of Dunmall (tenor and alto saxophones, penny whistle, bagpipes), Percy Pursglove (trumpet, bagpipes), Steve Tromans (piano), Dave Kane (double bass) and Hamid Drake (drums, frame drum).

A suite is a diverse collection of pieces to be played in a set order, usually unified or linked by a story, subject or theme, in this case a portrayal of the flux and flow of our dream experiences, which can jumble the events of our waking lives. As Lewis Carroll depicted, it’s a topsy-turvy world in which the little becomes large and vice versa. Duration as felt in sleep can telescope – what seems to take place on an epic scale might in reality last just a few minutes, or it can take forever to walk up a flight of stairs. It’s a notion ideally suited to improvisation, and like chains of association, each piece morphs into the next with no clear division.

The suite opens with ‘Dreamtime’, a breezy, ebullient theme. Little by little, the instruments desynchronize around solos for tenor, trumpet and piano, the tune becoming more diffuse as it’s continually stretched, eventually snapping as everyone chips in to create their own pointillist rendition. This becomes the opening of ‘Warning’, with successive solos for trumpet – which repeats and reconstitutes a phrase, as if being chased in circles –  saxophone – the phrase undergoes irregular chops and changes, never settling –  and piano, where it takes a Monkish turn, with parallel hands spinning out ever longer lines. Ending with a flourish and repeated notes from Tromans, we’re then into ‘Call an Elephant’ with a reversal of register: Dunmall on penny whistle playing a tune with a Gaelic twist, joined by Pursglove’s bagpipes, where it takes on an Eastern flavour over drone bass. When played on trumpet and piano it becomes more plangent, then abstract on alto saxophone and scuttling piano, followed by a whirligig of deconstructed scraps for the whole ensemble. There’s a passage for understated bass (the converse of most bass solos) and a melody on piano, more suggested than explicit, gradually growing in body and sparkle, supported by Drake’s elasticated drum patterns and rolls.

‘Frame Drum and Bagpipes’ begins with…you’ve guessed it, in a melange of different folk music over Drake’s hypnotic pulse, then contorted figurations on the piano’s interior and bass, plus daubs of trumpet breath. From this, the bouncy ‘It Dawned on Me’ materialises, a straight-ahead piece which grows and then dissipates into skeletal  piano and tremolos, the foundation for the closing ‘Sacred Hymn’ – the same theme as concludes Underground Underground – this time delivered as a rousing gospel tune with flickering piano runs, as we emerge reassuringly, into daylight.

A nicely balanced and satisfying collection, with no obvious interpretation – but that’s the point – and proving that there’s nothing trivial about the play of our imaginations.

Two, rather brief excerpts, from the performance of the Dreamtime Suite in Birmingham: