Philip Gibbs is a prolific improviser whose work quite often flies under the radar. He self-taught himself how to play the guitar at the age of 13 and has been developing his style, technique and vocabulary ever since. One of the key developments in his playing being a two handed tapping technique that he developed in the ‘80’s and has been refining in different contexts through to the present day. He seems to use this with great effect and it appears to have become quite a significant feature in his armoury of techniques in a very adaptive and flexible way where he has such control that it is more of an approach to playing the instrument as opposed to just another trick or quirky effect. Having been an erstwhile colleague of Paul Dunmall he has appeared on many of the saxophonist’s recordings, including some of the albums recently reviewed as part of our Paul Dunmall week (here, here & here). Here are a couple more recently released albums in which Gibbs features. 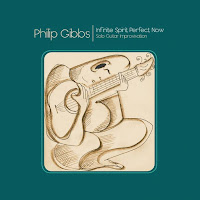 This is a set of solo guitar improvisations, which gives us the chance to hear Gibbs’ intricate and often delicate sound structures and textures that have furnished other recordings, often groups, without any other distraction. Derek Bailey comments in his book Improvisation (1992) that for the majority of improvisers the work is about playing with other people, however at some time or another most improvisers explore the notion of solo playing, even though it may seem to contradict the relational content of improvisational collectivism. Personally, I find the exploration of solo playing to be at the very point of improvisation, with the development of a personal vocabulary, complete self-exploration, inward focus, sustainability and a singular vision honing the overall musicality of the musician into something coherent, consistent and individually creative. With Infinite Spirit Perfect Now this is exactly what we get.

The album consists of a set of pieces ranging in length from one minute through to thirteen minutes that provide us with explorative playing, a unity within the material and a coherent outlook throughout the whole of the album. The album starts with one of the shorter tracks ‘A Mad Dreaming’ which is a beautiful vignette with harp-like glissandos and something which sounds like a cross between an African instrument, such as the Kora, with a slight hint of Flamenco guitar added in. This is then followed by the longest piece ‘The Cosmic Mirror’, a much more worked through piece with relation to the material and technique being presented. With an array of similar but subtly differentiated sounds resembling percussive drumming, prepared piano, hammered dulcimer, and musical boxes all being produced through a tour de force of his two handed tapping technique. ‘Alignment’ offers another slight colouration with the exploration of a narrow envelope administered through a ‘wah-wah’ type pedal to good effect, whilst ‘Multiversal-Dance’ a binary form piece contrasting what sounds like the imitation of a balafon (Wooden African Xylophone), produced by virtuosic tapping in a smooth legato style, with that of an object being slid and bounced over the strings in the latter half. The use of pointillistic textures, the gradation of subtlety of tone and the variation of references to ethnic instrumentation produces a complex and interesting set of pieces presented in a very modest way. 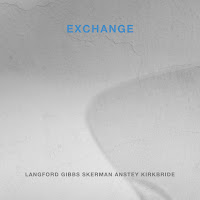 If Infinite Spirit Perfect Now showcases Gibbs’ solo playing then Exchange clearly demonstrates his contributions as a highly experienced musician within an improvising collective, which he has done so effectively for many years. Gibbs’ style of playing is very empathetic with others playing and his own contributions tend to blend in so well with the overall sound environment that often his highly rhythmic patterns and complex percussive textures tend not to sound like a guitar at all. The group on Exchange consists of Mark Langford (bass clarinet & tenor sax), Roger Skerman (drums), Paul Anstey (bass), Hugh Kirkbride (bass) and Gibbs (electric guitar). It is a similar line-up to the group which released Fringe Music (2014), but incorporating another bass in Kirkbride and with Skerman taking up the drum role instead of Bob Helson.

There are eight tracks on the album, each with a suggestive title such as ‘Scuttle’, ‘Fizzle’ or ‘Stream’. I’m not sure whether these titles were applied afterwards or if they were given before the improvisations for semi-instructive purposes and the connotations that they might hold for a performance. From a listeners point of view it’s very tempting to ‘read’ meaning into these musical events especially with such pregnant titles. Tracks such as ‘Chaser’, a two horse jaunt for the double basses, with its naturally sounding overlapping dialogic phrases, whilst the undulated, growing and then fade out of ‘Ripple’ seems to buy into this thinking. Gibbs’ distorted guitar is at the forefront of ‘Trag’ with it’s pyrotechnic display of wails, screams and swirling waves of uproariousness, making full use of the space that Langford’s tacit sax has left. The last track ‘Bird Fish Snake’ moves away from the more direct improvisational approach, that the rest of the album takes, and bears a distinct free jazz feel to it, with Langford’s sax providing a more linear melodic line over the comped chords of Gibbs’ guitar.

Overall the playing on this album is a careful balance of equality between the sounds and the musicians intent, a true collective, with individual instruments coming to the fore on occasion or by circumstance such as when certain others aren’t playing.

Philip Gibbs seems to have been quite prolific over the years with performances such as these within improvisational collectives, and it is also satisfying to hear his solo work with the craft and creativity that his singular vision brings to this.