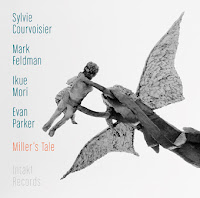 Sylvie Courvoisier is a Brooklyn-based pianist, composer, and improvisor that the readership of this blog is probably well aware of; with over 25 records released as a leader, and around 30 as a sideperson, she’s an undoubtedly prolific force in the world of contemporary jazz. Luckily for us, 2016 and the early part of 2017 seem to mark a rather active period for Courvoisier, after a relative dearth of recorded output in 2015. Her studio output has surged recently, and now there is a steady supply of recordings with which she can pull listeners into her captivating sound-world. Recorded in 2015, Miller’s Tale is the first of these I’d like to draw readers’ attention to. Along with Courvoisier, Miller’s Tale features Mark Feldman on piano, Evan Parker on tenor and soprano saxes, and Ikue Mori on electronics.

One of the most distinctive aspects of this album lies in the track sequencing; while the first four pieces are full-group improvisations, the last five feature various duo configurations, so that Miller’s Tale becomes a kind of treatise on the dynamics of improvisational group interplay, and how the basic building blocks (e.g. the players) can be switched and substituted to produce results that are often quite divergent. Compare, for instance, “The Reason Why” and “Nothing’s Planted,” which are sequenced side-by-side on the album. While the former has the structure of a conversation, with Parker responding in kind to the melodic phrases that Feldman turns out, the latter seems more like a soliloquy held in the middle of some dense, sweltering jungle - Parker’s ever-inquisitive tenor is on its own, with Mori’s electronics offering little in the way of footholds for him to latch onto. When Feldman and Mori get the chance to engage in a duo improvisation, as in “Riding on a Smile and a Shoeshine,” the effect is equally disquieting; Feldman plucks and pulls at his instrument, drawing out a range of uncanny tones that, in the context of Mori’s enveloping waves of digital detritus, sound absolutely ghostly.

When held up against the dialogic intimacy of the duo improvisations, the tracks in which the full group plays are almost narrative in the way they unfold, with voices constantly bubbling up and dissipating. Considering that Miller’s Tale seems to be either an homage to or an account of the life of famed playwright Arthur Miller (all of the track titles are direct references to either works that Miller has produced or quotations within those works), this is hardly surprising. “Death of a Salesman” opens with Feldman’s distinctive violin, and soon introduces a range of characters: Courvoisier’s percussive plinks-and-plunks, Mori’s understated gurgles, and Parker’s breathless runs.

If the first track is a rapid-fire exchange between old friends, the second, “A View from the Bridge,” is the moment when the conversation has dipped into the bittersweet well of history - atop Courvoisier’s rumbling, drone-like foundation, Parker and Feldman construct minor-key monuments to the past.

The longest piece, “The American Dream,” could very well be taken as an indictment of that which its title references, especially given the current political climate (and considering that two members of the group, Courvoisier and Mori, immigrated to, and have become permanent residents of, the United States). Here, Feldman’s violin can only be described as anguished, shifting through a series of lamentations that always seem to be on the verge of buckling under their own emotional weight. Mori accents this sense of despair with her own burbling rivulets and insectile chirps - anyone familiar with her work knows that she has long been a master of such textures, but they have yet to lose their power to disarm and unnerve. With little-to-no rhythmic underpinning, and a similar lack of melodic anchors, these group improvisations rely on the ability of the players to emulate conversation - the turn-taking, the constant recycling of old ideas, the unplanned arrival of new ideas, and the strained silences. Miller’s Tale has all of this and more, and it represents some of the finest that free jazz has to offer.
Paul on Monday, February 20, 2017
Share

Good review. The album's available as a download from Bandcamp, including 96/24 hi-res:

Interestingly, In ‘The American Dream’ at 5.45ff. Feldman appears to quote the opening violin part from Alban Berg’s Violin Concerto (open strings) and possibly other parts from later in the concerto. Berg dedicated it “To the Memory of an Angel” – Manon Gropius, the daughter of Alma Mahler and Walter Gropius, who had died aged 18 from polio after the work was commissioned. I don’t know if this is a coincidence (I suspect not, as Feldman will know the concerto) or what significance, if any, it has in the piece. It does sound lovely, however.