Prolific New York-based trombonist Steve Swell projects moves between many interesting projects. Last year he released a solo trombone album (The Loneliness of the Long-Distance Improviser), another album celebrating his 60th birthday (Kanreki, Reflection & Renewal), two albums with the working trio with German reeds titan Peter Brötzmann and Norwegian drummer Paal Nilssen-Love - the latest, Live in Copenhagen reviewed below, and another three albums leading ad-hoc outfits, one of these, The Chicago Plan, is also reviewed below. 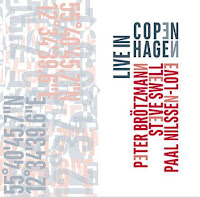 Live in Copenhagen offers another plan, focused on the high-octane, immediate intensity of this heavyweight trio. This is the second album of the trio, recorded live as the debut album, this time in the Jazzhouse club in Copenhagen, Denmark on April 2016. Brötzmann and Nilssen-Love have been working together since that last phase of Brötzmann Tentet, continuing as a duo and with ad-hoc trios with Japanese koto player Michiyo Yagi, cellist Lonberg-Holm and Italian electric bass player Massimo Pupillo, but Swell joins them for the first time during on stage, on the trio's first European tour on February 2015.

The other, shorter pieces highlight further the rich and profound vocabulary of this trio. “Actionable Rhetoric” surprises with its reserved lyricism. Brötzmann and Swell sing patiently the touching melody, colored beautifully with delicate percussive work by Nilssen-Love. “Expressionable Ephemera” resumes the trio's explosive, muscular mode, balanced as a tight, organic unit. “Persistent Repercussions” enables Nilssen-Love to take the lead and set a loose, polyrhythmic atmosphere that invites Swell and later Brötzmann to explore playful melodies that enjoy a tough-swinging pulse. The last, shortest “Last Night Was, For Sure” is the most poetic one, introduced by Swell otherworldly breaths, followed by Brötzmann moving melodic theme, immediately echoed by Swell and resonated by Nilssen-Love cymbals work, slowly building its tension, but releasing it in subtle, compassionate manner. 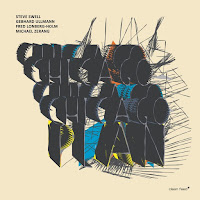 The Chicago Plan offers a solid plan. Match two long-standing couples - New York-based trombonist Steve Swell and his partner in the Ullmann/Swell Quartet, Berlin-based reeds player Gebhard Ullmann, and the Chicagoans, cellist Fred Lonberg-Holm, who also adds electronics, and drummer Michael Zerang, who have collaborated together with countless partners, among them Brötzmann, Swedish pianist Sten Sandell, German trumpeter Axel Dörner and Norwegian reeds player Frode Gjerstad. This plan enjoys the accumulated, extensive experiences, personal vocabularies and distinct improvising strategies of these four musicians, coming from three cities, each a fertile scene of free jazz and free improvisation.The quartet was recorded in Chicago on September 2015 after a short American tour and already established itself as a working group in another European tour.

Ulmann's compositions for this quartet are more structured. “Variations On A Master Plan, Pt 3” contrast him and Swell, both narrate the complex, edgy theme, playing in unison, with Lonberg-Holm and Zerang who expand the compositional ideas with loose, shifting rhythmic patterns. “Variations On A Master Plan, Pt 2” follows a similar strategy but in a more subtle and lyrical atmosphere. “Déjà vu” demands all to abstract Ullman clever rhythmic games based on sudden intervals. The closing composition, “For Henry”, offer a well-balanced, collective, chamber quartet improvisation, bluesy and restrained in its spirit.

Swell's 19-minutes of “Composite #10” is the most open piece. Zerang introduces it with a commanding work that explores his polytonal sonorities, beginning with metallic sounds that imitates the Brazilian string instrument, berimbau, slowly varies his percussive palette with a Middle-Eastern pulse that triggers intense improvisations of the whole quartet. The extended cello plus electronics solo of Lonberg Holm on this piece transforms from a tortured, noisy storm into a surprisingly melodic one. Swell's second composition, “Rule #1: Make Sure You Can Play Your Own Tune”, is a propulsive, free jazz piece that calls for muscular, ecstatic solos of all the musicians.