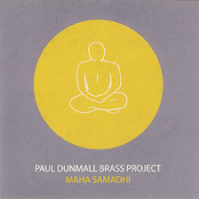 Miles and Gil Evans probably started the ball rolling with Birth of the Cool (Capitol, 1956), since when we’ve had albums such as Coltrane’s Africa/Brass (Impulse!,1961) and John Surman and John Warren’s Tales Of The Algonquin (Deram, 1971) and  Brass Project (ECM, 1993) – large ensembles with only brass instruments and a rhythm section (sometimes supplemented with piano), no woodwind or other melody instruments. It’s a format for which Paul Dunmall has been wanting to write for many years.

The line-up is Dunmall (tenor saxophone), Aaron Diaz, Alex Astbury, Percy Pursglove (trumpets), Dave Sear, Josh Tagg (trombones), Jo Sweet, Josh Palmer (tubas), Olie Brice (double bass) and Tony Bianco (drums). The ensemble’s conducted by Ed Bennet and the compositions were written by Dunmall. The title and names of the pieces are taken from episodes in the life of Sri Ramakrishna (1836 – 1886) as documented in his The Gospel of Sri Ramakrishna.

With a focus on a family of instruments, there’s a homogeneity that can highlight their distinctive timbre, so that the absence of contrast becomes an advantage. With brass, it’s a richness in harmonic overtones, and collectively, a fruity and dynamic sound which packs a punch, as in the opening ‘Ecstatic, Unbearable Love’, a vivacious depiction of a dance with Krishna. There’s a searing trumpet solo from Pursglove, succeeded by Dunmall’s equally heated solo on tenor, each punctuated by glowing bursts from the brass.

Brass also excels in soft, legato lines. In ‘Temple of the Mother's Presence’ the instruments slowly appear and merge in a solemn procession of overlapping entries. As if signifying the transmutation of a stone figure – the inspiration for the piece – the elliptical theme is energised by solos for tenor, trumpet (Diaz) and trombone (Sear). Long swells over drums seem to mark the transition back to stone, save for one final glimmer of movement. ‘In the Cossipore Garden’ announces a weighty dirge on the tubas, repeated by the whole ensemble over Bianco’s billowing drums. There are solos for trombone (Tagg), followed by trumpet (Asbury), in both cases striking sparks with the rest of the ensemble. The saxophone moves us to a different level with refulgent variations on the theme, wrenching the funereal chorus into acclamation.

There’s a pervasive spiritual and expressive core to much of Dunmall’s music: the rival forces that riddle our lives and the struggle for some kind of resolution, however transient; a quest that also preoccupied Coltrane in his latter years. On the title track, there’s a tender commentary on the brass melody from Dunmall’s tenor. He’s then enlivened by the irregular syncopation of bass and drums and the saxophone quickens in mood and speed, its mercurial flow counterpointed with block-like fragments from the brass. After Brice’s solo, there’s reconciliation in a sonorous restatement of the theme, combining Dunmall’s single voice with the many.

The album ends with ‘Infinite Cry’, a stirring invocation of some higher plane, with all instruments raised in supplication, in which we hear shades of another brass band tradition, that of New Orleans.

It’s unclear why Dunmall’s music doesn’t receive more attention. He doesn’t fit into any neat category, a bar to those who prefer to listen by labels. Perhaps it’s that the more albums you produce the fewer get heard, however odd that might sound. He’s an unpretentious figure who doesn’t claim revolutionary status, only to have built on and continued the work of his predecessors. By so doing he has helped establish that free jazz is an abundant resource for creative music. Hopefully, this week of reviews will encourage more people to listen to one of the outstanding and most flexible musicians of his generation.

There are no clips of Dunmall’s Brass Project, so here’s some footage of him with Mark Sanders (drums) and Alan Niblock (double bass), a trio which so far as I’m aware has never recorded.