Readers of the blog are already familiar with the work of Swedish reeds player Martin Küchen. He is the leader of the free jazz Angles and All Included bands and the Trespass Trio, as well as a brilliant free improviser who leads several trios and from his experimental explorations, a musician who is always ready to explore and expand new sonic terrains, bringing the spirit of freedom and dissent to his many musical projects. 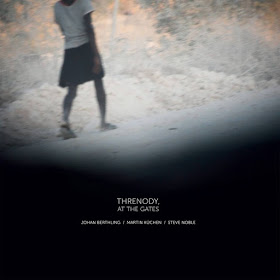 The sophomore album of this free-improv trio - featuring double bass player John Berthling, who plays with Küchen in his Angles band and hosted him in the earlier version of the Fire! Orchestra, and English drummer Steve Noble, who has played with sax players as Peter Brötzmann, Tony Bevan and Alan Wilkinson - follows the fiery and muscular dynamics of Night In Europe (No Business, 2015), that was recorded live at Glenn Miller Café, Stockholm, on December 2014. Threnody. At The Gates was recorded on November 2015 at the Gula Studion in Malmö, expanding the debut album's restless, edgy dynamics.

Küchen plays here the tenor and soprano saxes, the retardophone and the flute. The six pieces, all numbered as “Gates”, feature the trio in an explosive, highly rhythmic mode. The tight, massive rhythm section of Berthling and Noble keeps spiraling around Küchen imaginative attacks, never letting the heated tension to subside even for a second. The second and longest piece, is a brilliant 13-minutes of free, highly intuitive improvisation, shifting fast between dynamics, from loose, free-associative ones, stressing the distinct vocabularies of all three musicians, to faster, muscular ones. All with deep intensity and great focus on the details. Surprisingly, this intensity still lets Küchen articulate a strong, clear theme even within the segments where he investigates his horn's timbral distortion. The fourth piece is the quietest one, sounding like a twisted chamber ballad, where all three musicians patiently contribute scattered ideas to the sonic puzzle. Berthling and Noble suggest a playful pulse on the fifth piece that allows Küchen to explore different sonorities, including buzzing, noisy and altogether tortured ones, while articulating a strong, emotional theme. 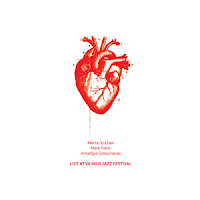 This limited-edition vinyl (only 300 copies) matches Küchen for the first time with an ad-hoc rhythm section of Ukrainian double bass player Mark Tokar (known from his continuous work with German drummer Klaus Kugel, both playing together in a trio with Ken Vandermark in a trio and in Vandermark's Resonance ensemble, as well as with Polish reeds player Wacław Zimpel's Undivided quartet) and fellow Ukrainian, Lithuania-based drummer Arkadijus Gotesmanas (known for his work with Lithuanian-Israeli pianist Vyacheslav Ganelin and Lithuanian reeds players Petras Vyšniauskas and Liudas Mockūnas). The trio improvises live music to Harry Hoyto’s 1925 silent fantasy film, The Lost World, an adaptation of Arthur Conan Doyle’s novel of the same name, as part of a three concert program from the 2015 edition of the Lithuanian festival dedicated to Küchen's work.

Küchen alternates here between the tenor and alto saxes and the flute. On “Part I” the trio develops patiently the empathic, conversational interplay. The highly versatile and inventive rhythm section of Toker and Gotesmanas trigger Küchen to explore overlapping, sometimes distorted timbral terrains and to build the suggestive tensed atmosphere, while, during their turn, contextualize his attacks within colorful rhythmic patterns. “Part II” employs the tight interplay in full power. The propulsive, almost swinging rhythmic basis enables Küchen to charge the dramatic tension with more colors and shades, stressing his unique vocabulary and experimental, extended breathing techniques on both saxes and the flute. Still, Toker and Gotesmanas dance gently around Küchen, wisely expanding and deepening the suspense-filled, rhythmic changes but do not attempt to push Küchen over the edge. The trio conclude this passionate dance in quiet, poetic coda, enjoying a well-deserved applause.
Paul on Saturday, February 11, 2017
Share