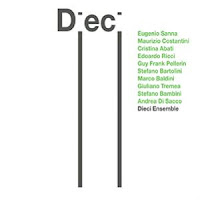 Dieci Ensemble is a ten-piece improvising group of both experienced musicians and young newcomers based in the Tuscany region of Italy, gathered around guitarist Eugenio Sanna, a veteran of the scene active since the late Seventies.

The ensemble is devoted to pure non-idiomatic improvisation, and in some ways this record could actually be a tribute to Derek Bailey, one of Europe’s free improv most distinguished exponents. The way the record is arranged reminds of the Company collective encounters organized by Bailey, as it develops in a series of small group numbers (with only three tracks out of twelve performed by the whole ensemble), vibrating with the same sense of discovery, putting together different instrumental voices and exploring their affinities and open contrasts, without preconceptions. The influence of Bailey’s revolutionary approach to the guitar is also evident in Sanna’s playing, even if he manages to affirm his vision with a very personal approach to sound and timbre, made of fast, minimal moves and skillfully controlled dynamic turns.
The tracks are mainly snapshots of improvising activity, in which all the musicians equally contribute to the collective dialogue, preferring the immediacy of spontaneous interaction to more defined structural developments. Sometimes the frenzied approach to the music risks to turn the performance into chaos, but the musicians are careful in balancing their interventions with the collective sound, keeping the music flowing even in the most crowded passages.
The most successful episodes are the small groups’ ones, where the atmosphere is less dense and there’s space to further develop an evolving improvisational discourse, as in “Fiducia globale” – where an insisting drum shuffle sustains and propels the guitar’s distorted excursions, interweaved with textural electronic accents; or “Chiaroscuri” – an all strings trio engaging in a dark, austere dialogue hinting at contemporary music, where the less frantic interactions let the music emerge with striking clarity.