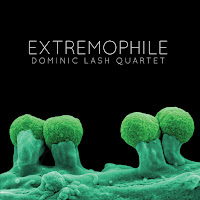 Extremophile is new album from the Dominic Lash Quartet. Their previous album, Opabina, also featured the core group of Lash on bass, Javier Carmona on percussion, and Ricardo Tejero on saxophone and clarinet. For Extremophile the pianist Alexander Hawkins has been replaced by the guitar and clarinet of Alex Ward, providing an additional burst of vitality to the group sound. Ward also recorded, mixed, and mastered Extremophile and it sounds beautiful throughout.

The first track “Puddle Ripple” is a short group improvisation leading straight into one of Lash’s tunes “Mr. S.B.,” which starts as a rather swinging groove tune. An unaccompanied bass solo in the middle of the piece leads to an exciting guitar solo from Ward, joined by the ensemble before a short reprise of the head.

Most of Extremophile is comprised of original tunes or group improvisations, but there are two interesting covers. The first, “Fumeux Fume,” is a rondeau from the late 1300s for three voices composed by the French composer Solage. Today, Solage’s work is mostly known through the “Chantilly Codex,” a collection of one hundred and twelve compositions, many of which are notated in a highly illuminated style, at least ten of which have been attributed to Solage. The medieval polyphony lends itself well to being interpreted by the group. The simple, spare opening of bass, sax, and guitar is soon joined by Carmona’s slowly growing percussion, eventually becoming an assaultive showcase for the percussionist.

The other cover on the album comes at the end, and is the longest track on the album by a good bit. At close to fourteen and a half minutes, “Mixed mixed” is a cover of Cecil Taylor’s “Mixed,” originally released on The Gil Evans album Into the Hot (Impulse! 1962). The Lash Quartet version is slowed down a bit, providing a more meditative and lyrical opening before careening off a cliff down into a wild pit of seething beautiful madness.

Extremophile is an adventurous album that manages to walk the line between improvisation and composition, producing an album with just enough form for your ear to lock unto and just enough freedom to keep your ears and your mind interested. The packaging also has nice artwork by Shea Walsh, worth the few extra dollars for a physical copy over the download.