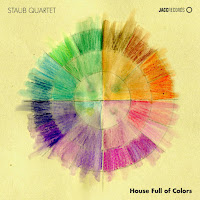 When listening to and thinking of abstract music, it’s not rare to fall into states of faux synesthesia. Our subconscious selves, faced with a lack of context and fixed familiar forms, surreptitiously take over and translate sounds into images and sensations, creating associations through atmospheres and memories of touch, taste, and smell. Thus the music takes the appearance of films, paintings, and moods, while individual sounds are transformed into still frames, fuzzy brushstrokes, and granules of emotion. In the case of Portuguese STAUB Quartet’s debut record, House Full of Colors, the tables are turned on the listeners as the group shapes the music in an impressionistic manner, their playing mimicking the dispersion of light through prisms, breaking into colors and projecting hidden imaginaria.

The album opens with Miguel Mira’s cello striking gently and followed only by restrained rushes of Hernani Faustino’s double bass. Soon, they are joined by Marcelo dos Reis’ fragmented guitar chords, accentuating rather than dictating, while Carlos “Zingaro” Alves’ violin dances spastically, fleshing out an abstraction of a tuneful melody in the background. “Quiet Arcs” is a bright, vibrant piece with a sense of optimism in its notes and improvised percussion emanating from the bodies of the stringed instruments. In contrast to this calm cut, what follows becomes all the more striking. “Red Curtains” whirls nervously, leaving behind a heavy taste, both material and ethereal, of light filtering through thick, dark drapes. It’s a sparse and deep song that explodes and subsides in waves of cello, violin, and double bass pandemonium, supported by dos Reis’ repetitive, droning guitar plucks.

Comprised of prominent members of the bustling Portuguese free jazz and free improv scene, STAUB Quartet presents music imbued with Mediterranean passion and joviality which is channeled into improvised patterns that are both spontaneous and cleverly thought out. The intro of “Opacity Rings”, the longest piece on the record, is a good example of such an approach. The movement starts muted and quiet, opaque even, in dark overtones, resembling the soundtrack of a Carlos Reygadas movie, encompassing all that lust and grief of life that the Mexican director tries to capture. Carlos Zingaro’s violin bows densely but freely, while counterpointing percussion and bass twangs sit opposite to it, almost stuck in place. Unlike what the title of Reygadas’ masterpiece Stellet Licht suggest, the light here is anything but silent.

The final three pieces, “Knots of Light”, “Resonant Shades”, and “Discrete Auroras” dispel the heaviness brought on by “Opacity Rings”. The musicians chase each other hastily yet patiently, creating structures that are knotted in one moment, forcefully dynamic and bright in the next. “Knots of Light” is markedly aggressive, with the four stringed instruments clashing over each other. Dos Reis’ guitar devises another bulbous but undulating loop, Carlos Zingaro’s violin screams fiercely, while Mira and Faustino find themselves confined in the space between them. With such a musical accompaniment, the idea of tangles of luminous matter exploding and flickering becomes vivid, almost palpable. In contrast, “Resonant Shades” reigns in the chaos brought on by the previous track as dos Reis settles in a liberated role, dominating the track with his playing, simultaneously euphonic and serpentine. “Discrete Auroras” closes the circle with a surprising cyclical melody leading back, through an imaginary connection, to the record’s opening piece.

As expected, the meeting between four forces of the European creative music scene, which Miguel Mira, Carlos Zingaro, Hernani Faustino, and Marcelo dos Reis undoubtedly are, results in a seemingly fragile and volatile—as the light it is inspired by—yet vigorous experience. Permeated by a sense of frolic and obvious camaraderie, House Full of Colors explores the material through the immaterial, lighting everything with its inner luminescence as it fleshes out concepts that we thought were somehow confined to our mental spaces.