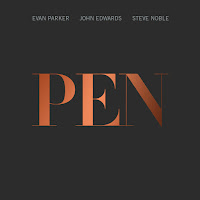 By Martin Schray with a little help from Colin Green

At a recent solo concert in Cologne, Evan Parker pondered whether he was improvising or
repeating what he’s been playing for the last fifty years or so, but guessed he was doing both. This suggests uncertainty when reflecting on his performances, but his playing remains original, pursuing a clear aesthetic using established parameters which delineate his music. After so many years he doesn’t re-invent the wheel (who does?) which is why his individuality can be heard when performing in new settings. Parker has played with most of the leading figures in British improvisation, so it’s surprising that the trio with John Edwards and Steve Noble has been unrecorded, until now. In an earlier review of an Evan Parker release (City Fall) I sang the praises of John Edwards and Mark Sanders as a rhythm section (though they’re much more than that). Edwards and Steve Noble are of equal quality, having augmented, amongst others, Peter
Brötzmann, Alan Wilkinson, Alex Ward, and Julie Kjaer.

On PEN Parker’s lines slip in and around bass and drums, blurred yet finely elaborated, like a northern light in a dark winter sky, bringing to mind one of Gerhard Richter’s abstract paintings. Like Richter, Parker displays a fluency and ease  -- proficiency mastered but not on display. As Mingus once said: “Making the simple complicated is commonplace; making the complicated simple, awesomely simple, that's creativity.“

Whereas Richter seems to comment on an illusionary effect – the appearance of something not quite present – Parker’s more concrete. His tenor saxophone meanders and flows, as bass and drums flicker like stars. The music is tight and cohesive, with no unnecessary affects (one of the principles in his bands), as well as excellent timing. He lets Edwards and Noble prepare the ground before stepping into the arena, winding in a relaxed fashion through a maze of rolling bass and high speed percussion. Once warmed up, the trio progress effortlessly, with Parker’s softer, fuller tone, a characteristic of his more recent playing. In “Part 1“ Noble joins Edwards’ solo with sharp high-hat shots, their instruments sounding as one. When moving into his circular breathing, Parker’s co-musicians usually fall silent, but here Edwards’ filigree tremolos and dark drones and Noble’s cymbal crescendos provide a compliment.

PEN is another solid contribution to Evan Parker’s catalogue, hopefully there will be more releases by this excellent trio.

You can order the CD from the label and listen to an excerpt here: