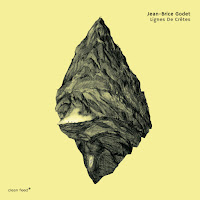 Admittedly, I had never heard of Jean-Brice Godet before delving into his newest release for Clean Feed, Lignes De Crêtes. There were, however, a few things about the recording that immediately piqued my interest: first, a quick glance at the album's information page reveals a rather diverse blend of “instruments,” especially when considering that there are only three musicians involved - in charge of clarinets, radio, and dictaphones, for instance, is Godet, while Sylvain Darrifourcq covers drums, percussions, and zither. Second, any album that involves renowned bassist Pascal Niggenkemper is one that, at the very least, warrants close attention. As one of the hardest-working performers in the world of jazz, free or otherwise, he has routinely pumped out music of consistently high quality. Lastly, Godet himself, though not necessarily on my radar before this release, has frequently worked with musicians who are constantly on my radar, like Joëlle Léandre and Anthony Braxton. If the old axiom that “you can tell a lot about a person by the friends they keep” held true, then I was positive that Lignes De Crêtes would be a compelling listen.

With track titles like “No Border,” “No Logo,” “No God,” and “No Fear,” one would expect (and maybe even hope) the pieces themselves to be iconoclastic and even a little unruly - luckily, they often are! The first, “No Border,” opens like the start of some decayed transmission from another world - light swathes of static, tentative feelers from Godet’s clarinet, and ever-so-slight hints of dread woven in by Niggenkemper. As the tension rises, the various slivers of sound begin to coalesce, and recognizable patterns materialize. The first of these patterns is made up of Godet’s serpentine figures, notes that tumble helplessly one after another. The second consists of Darrifourcq’s martial drum-work, almost breathtaking in the way that it leaps out of the swirling stew of abstract textures. Once Niggenkemper’s dense, percussive bass-lines come in, the picture of a somewhat “traditional” free jazz group emerges, and the listener can finally latch on to something concrete. “No Logo” is a brief, creaking sigh before the second long-form piece on the album, “No God.” Compared to the near-alien soundscapes of the opener, “No God” feels like a relatively straightforward bout of music-making - well, aside from the disorienting tape manipulation done by Godet. When the latter finally switches to clarinet, the piece secures itself as one of the most immediate on the entire recording, with Darrifourcq’s elastic rhythms and Niggenkimper’s springy, restless bass-lines offering the perfect support for Godet’s frenzied cries. The final piece, “No Fear,” features Darrifourcq on zither, an instrument utilized here more for its textural possibilities than anything else. As the final ragged breaths of the zither’s strings fade off, so too does any sense that this group has any limits.
Paul on Friday, April 14, 2017
Share