Slovenian drummer-percussionist Zlatko Kaučič, one of the most prolific musicians the Slovenian as well as the Italian scenes, began to gain well-deserved international recognition in the last decade due to his collaborations with some of the most innovative European musicians. Kaučič recorded with reeds players Peter Brötzmann (Tolminski Punt, Splasc(h), 2007), Evan Parker (Round About One O’Clock, Not Two, 2011), Ab Baars (Canvas, Not Two, 2015), double bass player Joëlle Léandre (A Woman’s Work, Not Two, 2016), and pianist Agustí Fernández (Sonic Party, Not Two, 2014). In all of these free-improvised meetings, Kaučič presented his own highly personal language. The following, recent releases of Kaučič, suggest other sides of this unique musician-composer-improviser. 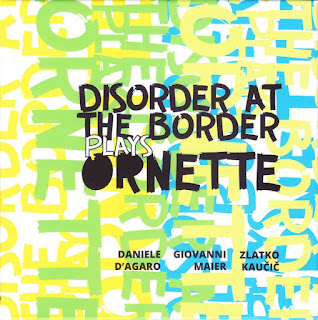 Joe McPhee tells an insightful story about Ornette Coleman in a poem he dedicated to both Coleman and bass player Dominic Duval:

To which Mr. Coleman replied,

‘The only keys I have are the keys in my pocket”.

Disorder in the Border, the trio that gave Coleman Hawkins' tune a prophetic, political meaning - Italian reeds player Daniele D'Agaro and double bass player Giovanni Maier with Kaučič applies Coleman's lesson. The trio interprets Coleman's tunes as if these ones were their own music, clearly not attempting to follow Coleman's highly personal delivery of these tunes. Disorder in the Border's acoustic instrumentation is different from the groups who recorded on the six Coleman tunes covered here, most of them from the middle to the late sixties, enabling the trio to stress its own voice.

The trio's sophomore album was recorded live - like their live self-titled, free-improvised debut album (released on Maier’s Palomar Records, 2014) - on October 2015 at the Jazz & Wine Festival in Cormons, Italy. The live setting commands the album's urgent, organic atmosphere. “New York”, which opens the album, and “Comme Il Faut”, which closes it, are based on the complex polyrhythms of Maier and Kaučičm but both pieces are deeply rooted in the European legacy of free jazz: more nervous and muscular, less lyrical and not bound by any rhythmic pattern. The intense performance of “The Garden of Souls” and the abstract interpretation of “Him & Her” cement Maier's dominant role in this egalitarian trio, alternating brilliantly between fast bow work, extended bowing techniques and tough pizzicato work, while D'Agaro and Kaučič outline the basic motifs. Only the ballad “Faithful”, the only tune originally played by a Coleman trio (The Empty Foxhole, Blue Note, 1968), covered here in a quiet and delicate arrangement, and the brief “Mob Job” (played by Coleman and Pat Metheny on Song X, Geffen, 1986), are close in in spirit to the lyrical, rhythmic side of Coleman. 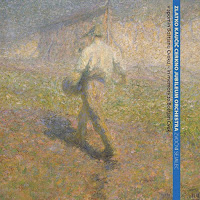 Zvočni Sejalec (Sound Shower in Slovene) is dedicated to the memory of the founder and long-time director of the Slovenian festival Jazz Cerkno, Boštjan Cveka. Kaučič conducts a 12 Italian and Slovenian musician orchestra, formed especially for the 20th edition of Jazz Cerkno, featuring double bass player Maier and sax player Cene Resnik (his quartet album, From The Sky, was released by Clean Feed, 2014) . Zvočni Sejalec was recorded live on on May 2015.

The orchestra's emotionally-charged performance is a wild journey through many colorful sonic universes and modes. This orchestra encompasses spacey ballad form on “To Paul”; contrasts Sun Ra Arkestra-tinged, fusion freak-out with guitar riffs that echo the Rolling Stones’ “Paint It Black” on “Kozmično Doživetje” (Cosmic Experience), with a wild guitar solo by Vitja Balžalorsky; exploring gentle folk motifs on the abstract, collective improvisation “Bombarduon” and popular film themes on “Na Svoji Zemlji”; suggesting its local Mediterranean interpretation to the New-Orleans-ian funeral march on “Kekčeva Pesem” (Kekčeva Song) and concluding with “Srečko Lesica” that deconstructs Balkan themes and then weaves them again until the propulsive, folk dance-like coda. 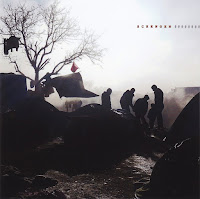 The Orchestra Senza Confini/Orkester Brez Meja (Borderless Orchestra in Italian and Slovene), is a joint project of Kaučič, who led before the Slovenian Kombo B Orchestra, and Maier who has played in the Italian Instabile Orchestra and founded the Italian research-improvisation collective Dob Orchestra. The orchestra was founded in 2011 for the first edition of the Slovenian Brda Contemporary Music Festival. Schengen, titled after The Schengen Agreement that led to the creation of Europe's Schengen Area, in which internal border checks have largely been abolished, is meant to symbolizes and reaffirms the European values, especially in times of tension and hatred towards foreigners. It is the orchestra sophomore album after a self-titled debut (Dobialabel, 2015). The orchestra was recorded at the Italian Le Nuove Rotte del Jazz festival in Trieste on June 2015

Kaučič and Maier act as simultaneous conductors of this expanded form of the orchestra, including students from Trieste jazz conservatory, and featuring all together 23 Italian, Slovenian, and Croatian musicians. The sonic scope and varied instrumentation of the orchestra - including vocal artist and live electronics player - enable Kaučič and Maier to sketch a colorful, kaleidoscopic and multifaceted textures. These textures alternate immediately between contrasting dynamics, from contemplative and serene segments to chaotic and energetic, often even eccentric ones, highlighting the commanding contributions of vocalist Elisa Ulian, clarinet player Clarissa Durizzotto, and flutist Paolo Pascolo. Kaučič and Maier, who keep exchanging “sections” of conductions, succeed to keep the eager musicians focused and to maintain a delicate, always engaging coherence.