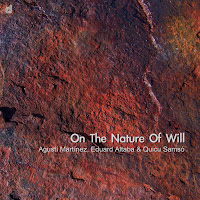 On the Nature of Will seems to begin in media res: a slow drum fill from Quicu Samsó, a few mournful saxophone notes that quickly become an insistent plaintive murmuring from Agustí Martínez, and a repetitive, thundering pizzicato and arco from Eduard Altaba on bass. “Vital Fluidity” opens the album illustrating the virtuosic range of this trio. Just past the midpoint of this short piece, the band reaches a crescendo when Samsó dominates, overwhelming the sax and bass, until all three fall nearly silent. Martínez breathes through his sax, emitting an occasional squeak, Altaba rubs something—a wooden rosary? a handful of dominoes?—around his bass, and Samsó thwaps the metal bits of his kit. This opening track asks for our attention if we are to follow this trio’s mercurial shifts of tone, rhythm, and volume.

“Anesthetic Dreams” begins much the same way as “Vital Fluidity,” only slower, sadder. Samsó rattles around the drum kit, the toms echoing from unconscious depths. Martínez plays a deep, husky, and emotive melody that evokes the smokiness of a Lester Young or Ben Webster ballad. Then Samsó’s wonderfully languid drum solo introduces a new tack from Martínez. Accompanied by brushes and a low cycling arco from Altaba, Martínez merely breathes, fluttering the stops. If we’re not paying attention, we might think the song has ended, but Martínez returns with a turbulent authority that draws Altaba and Samsó into the melee. Like the dreams of its title, the song tosses and turns from a gentle somnolence to confused agitation before curling up into the comfort of a wooly blanket.

“The Sand People” hovers as if over a Tatooine landscape, with Altaba “silent” fingering the neck of the bass, striking it, bowing the tailpiece, plucking, tapping, and emitting a few warping gull sounds here and there. After Samsó enters, brushing the snare, gradually adding to the steady percussiveness of Altaba, Martínez quietly peeks through the rubble until they’re all chasing a rhythm like a runaway landcruiser disappearing as night falls on the desert. The playing of Martínez on “Rusty Bones” is a melancholic as John Coltrane’s on “Alabama,” and on “Vulcanization,” the trio plays in the vein of the Ornette Coleman Trio, picking up the pace—bass and drums frantic, Martínez’s sax articulating lines adamant on its point. “Ruby Eye” begins with a disorganized field of metallic and wooden sounds from Altaba and Samsó. Martínez’s hollow breathing echoes, then prompts Altaba’s bowing; viola-like overtones rise between them. “Ruby Eye” is as forlorn as it is tangled in the trio’s agile interplay.

The passion exhibited in the next to last track, “Lust for the Sun,” is of a more playful, randier variety. The phrase “lust for the sun” occurs as a coda to Sappho’s Fragment 58, the shred of papyrus found in 2004 on a winding sheet of an Egyptian mummy. Sappho bemoans the fact of aging—black hair turns white, knees no longer nimble as fawns. Though she sighs, she knows that to be human is to age. Even the mortal Tithonus, she says, after whom the god of Dawn lusted, and then married, was subject to the ravages of time, but Sappho, like him, luxuriates in the bright embrace of the sun. Like Sappho, Martínez, Altaba, and Samsó express the eternal craving that mourns its inability to reach satisfaction.

On the Nature of Will ends with the subdued “A Tiny Green Fire in the Limelight.” While Altaba draws a heavy bow across strings and Samsó brushes and tinks anything in reach, Martínez plays what is, essentially, a breath solo, only now and again tightening his embouchure enough for a note to sound, and for us to notice him shivering the stops.

This trio of Martínez, Altaba, and Samsó are heirs to a lineage of free improvisatory interplay heard, notably, on The Ornette Coleman Trio’s live recordings from 1965: The Great London Concert and At The "Golden Circle," Stockholm. Like those records, the style and tempo of On the Nature of the Will moves back and forth from the solemnitude of Coleman’s “Morning Song,” to the puckishness of his “Happy Fool,” and to the vehement pace of “The Riddle.” Martínez, Altaba, and Samsó contribute to the evolution of this tradition with their arsenal of extended techniques, which complicates not only the emotional core of the music but increases the range of technical possibilities for a sax, bass, and drums trio.

On the Nature of the Will was released by Discordian Records, which says it is “a label and recording studio that promotes Barcelona's underground avant-garde music scene.” I am grateful to them for introducing me to a scene of free jazz of which I was ignorant, and a little put out that now I need to figure out how to finance a plane ticket so I can wander the jazz clubs of Barcelona. The only quibble I have about this record is its brevity (44 minutes) and the brevity of individual songs (average length: a bit more than 5 minutes). Obviously with this trio, “less is more,” for they often play sparsely and quietly, but like Sappho, I am left lusting for more.  This is an enthralling record that makes me want to listen to each of the back catalogs of Martínez, Altaba, and Samsó, and I am eager to hear their future releases.