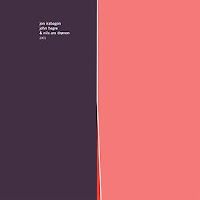 The 18 minute 'Berlin', Recorded in Germany in 2013, begins with a tone, a note, a drum scratch and then as the silence gets filled a little more, the true nature of this trio consisting of Jon Irabagon (Sax), John Hegre (Guitar) and Nils Are Drønen (Drums) starts to emerge. It soon becomes quite clear that all involved have brought their bags of auditory weaponry to a silence fight. Irabagon keeps it rather beautiful for the first two-thirds of the track as both Hegre and Drønen start pushing him to react to soundscapes and thunder. With 2 minutes to go, Irabagon turns on the growl and fires back at them both. Berlin, with all its shifts in direction, establishes itself as a very intriguing piece of improv.

The equally lengthy 'Fukuoka', starts in a more melodic tone with all players wringing out the last drop of creative energy and it sounds like they really enjoy each others company even though this track was recorded some two years later in Japan. Midway, it gets stripped down to the barest of minimums but always with the feeling that it will take off again. Spoiler Alert; not disappointed. Hegre leads the reawakened resurgence as the trio flies out of the hanger. You really get a sense here that Hegre and Drønen have worked together extensively in the past, which they have, a relationship that has been germinating for 20 years. The interplay here when the going gets louder is quite stellar. Irabagon, with all of his MOPDTK, Dave Douglas and Mary Halvorson history, he has no problem fitting into this equation.

And that’s it, its over. A mere 37 minutes that took over two years over two continents to record, a strong indication the music was worth continuing all that time later. As if it had only taken a heartbeat between sessions, one can only hope that with time and patience, we will hear something more from this trio in the near, mid, or far future.
Paul on Monday, April 03, 2017
Share