The Humble Vinyl Single Grows Up 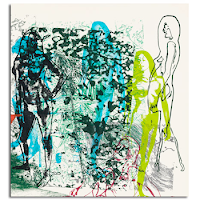 In the beginning, there were singles – only singles.  78 rpm shellac records, whether 10” or 12” in size, consisted of two sides of music.  An album was simply a collection of these records sandwiched into a book that looked similar to a photo album.  Vinyl record production changed this model, splitting the music buying public into two factions.  The serious music listener purchased albums, typically a 12” disc with a playing speed of 33 rpm, which contained multiple tracks on its two sides.  A symphony could now be played with only one gap in the listening experience instead of multiple interruptions every four and a half minutes – often with total disregard for appropriate musical cues.

The 7” record, generally played at 45 rpm, became the vinyl version of the 78 rpm record.  It was perfect for radio, teenagers, and rock 'n' roll.  And let's be honest, most of us became life-long music obsessives first as purveyors of the humble 7” single.  I had stacks of them even as a pre-schooler (long story).  Most of them were 3-minute slabs of rebellious, pubescent, distorted rock 'n' roll noise that sounded fantastic when blaring out of cheap lo-fi speakers.  (If you haven't heard Little Richard blaring out of overloaded cheap equipment, you haven't heard Little Richard.  Same goes for The Olympics, The Sonics, The Fall and Teenage Jesus & The Jerks.)

Blue Note Records became the first jazz label to release music on 12” shellac discs back in the 78 rpm era because it meant more time for soloists.  (12” shellac 78 rpm records had been solely the domain of Classical music up until this time.)  Jazz naturally thrived on vinyl 33 rpm records due to even more extended playing time, and this became its dominant format.  There were jazz releases on 7” records, of course – but they were shoved out of the marketplace by the presence of rock 'n' roll and the invention of the teenager.  So why release grown-up adult jazz and improvised music on the 7” single now?

While improvisational music needs breathing space in order to thrive, it is also possible to present only the successful bits of a longer session to the listener.  The vinyl single can condense the improvisers' shared triumphs into a few short minutes of magic.  Besides, the avant vinyl single combines two major signposts of our age – namely, the dwindling away of our collective attention span & a rekindling of the public's interest in vinyl records – and attempts in a small way to capitalize on them.  So let's apply the merits of the conventional pop single format to the slightly more participatory way in which we engage with improvisational recordings & see what happens.

Austria's Trost Records has gone all-in with a series of 7” releases called the Trost Jukebox Series, whose fifth and sixth records came out in November.  The fifth one is by Pita and Chra, also known as Christina Nemec and Peter Rehberg of the densely drone-oriented electronic trio Shampoo Boy.  This record continues the musicians' exploration of the drone, but in a slightly less claustrophobic way.  The drone on “Cynthia” is accompanied by glitches and small sonic bursts, which works well; but there is a single-note figure that bounces around throughout the proceedings that I find a bit distracting.  The flip side, “Not My People,” works better, providing a low-key atmospheric counterpoint to the A-side as it blips and blarps its way down the echo chamber to the accompaniment of electronic raindrops on the roof.  There is a real warmth here that is not often associated with purely electronic music.  Precise, concise, well-executed.  A good fit for the format.

Trost's sixth single in the series is a collaboration from avant cellist Okkyung Lee and electronics maverick Lasse Marhaug.  Marhaug opens “Silver Stain” with glitches, electronic bombs, and metal wires being processed through Godknowswhat.  Lee responds with manic sawing as Marhaug pwangs a spring on a piece of metal, supplemented by electric stomach gurgles.  The highlight happens when Okkyung reacts to Lasse's noise coma flatline with sustained cello screams.  On “One, One, One” Marhaug is clearly out of his coma, winding Lee up with sonic taunts & daring her to catch up to him.  You really root for her to beat the shit out of him as she gains traction, her bow whipping the wind.  It's total slapstick.  Recommended.

Joe McPhee recorded “Cosmic Love,” a single 12-minute track spread over two sides of 7” vinyl, back in 1970; but it hadn't seen the light of day until now.  John Corbett split the track with a fade-out at the end of Side A and a clean intro on Side B.  It features McPhee on “space organ” (a Wurlitzer), over which he dubbed himself on tenor sax.  (This is believed to be his first recording on tenor as well.)  Two alternating chords move patiently throughout the duration while McPhee plays like Jackie McLean succumbing to frequent uncontrollable outbursts of Arthur Doyle.  The picture sleeve is pretty groovy too, featuring a 1973 silkscreen collage of naked beauties by Fluxist artist Dick Higgins.  Overall, I'd say this record is probably not for the casual listener – but it's also not to be missed.  An important document in an unusual and strangely ideal format.
Paul on Sunday, April 02, 2017
Share