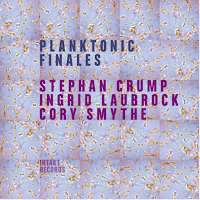 When three world-class musicians gather for a freely improvised encounter, the usual question isn’t whether they will excel individually (unless, perhaps, one of them is simply having a bad outing); the real uncertainty is whether the whole will somehow exceed the sum of the individual parts. When the magic of the finest free improvisation happens, it’s the collective nature of sound that ultimately should come to the fore, as the players generate musical power through their mutual interactions, receptive listening, and collaborative spirit of being willing to go wherever the music leads. On this record, the first involving bassist Stephan Crump, saxophonist Ingrid Laubrock, and pianist Cory Smythe, that magic is absolutely present in astonishing ways.

Laubrock and Crump have a long-established track record of working with cutting-edge groups in a number of guises. Laubrock’s compositional strategy has become especially intriguing of late (note her recent path-breaking releases Ubatuba and Serpentines), but her chops as a free improviser are similarly well-developed, as she can seemingly work in any context. Her command of tenor, soprano, alto and baritone saxophone is prodigious (although here she sticks to just tenor and soprano), and she has an uncanny knack for finding just the right technique to match the mood and direction of the piece she’s playing. Crump is perhaps best known for his pivotal role in Vijay Iyer’s trio, where his rhythmic and stylistic fluidity are essential for Iyer’s genre-spanning fusion of jazz, classical and pop idioms. He’s also worked with Mary Halvorson (in Secret Keeper) and with Steve Lehman, among others. Smythe, on the other hand, won’t be as familiar to most of the readers on this blog, as he travels first and foremost in classical circles, especially as part of the International Contemporary Ensemble. Even so, his recent work on Tyshawn Sorey’s Inner Spectrum of Variables and Nate Wooley’s Argonautica has garnered accolades and recognition of his willingness to seek compatriots from far and wide.

According to the valuable liner notes by Christoph Wagner, Crump, Laubrock and Smythe played only once previously, for an informal private jam session initiated by Laubrock; it went so well that they decided to record together soon thereafter. And it is readily apparent from the opening moments of the record that these musicians have an extraordinary rapport. On these eleven cuts, some short (six are under four minutes) and some longer (the lengthiest of the pieces, “Sinew Modulations,” runs over 11 minutes), beauty is to be found through the players’ careful, precise, and exceedingly generous ability to respond fruitfully and sympathetically to each move the other makes. Because they are so intent on following each other so closely, there are few over-the-top moments on the record where they fully let loose (the one exception being the explosive, fiery “Bite Bright Sunlight,” although at under two minutes it’s almost over before it starts). Instead, patiently explored ideas are the guiding concept, with each piece being remarkably cohesive and focused, developing its own logic as it unfolds. While it’s not composed music, one could easily be forgiven at times for assuming otherwise, as the quality of musicianship on display here is so compelling. Wagner insists that all that happened was a general, agreed-upon direction before the outset of each piece, after which the music took over. This makes the cohesiveness of the pieces all the more striking.

Although he doesn’t rely on it exclusively on the record, Crump’s bowed bass is an essential ingredient to the music. He’s able to provide essential musical direction on a number of the pieces by way of oblique passages that Laubrock builds upon, sometimes by following them directly and in other instances by winding in and out of them. (Yes, he can also do a mean walking-bass line: just listen to him on the last portion of “Sinew Modulations” for evidence.) Laubrock’s playing is typically dexterous and varied, with long, languid, dusky tones and phrases alternating with nimble flourishes and ecstatic flights. But as vital as Crump and Laubrock are, Smythe is a special revelation. Whether in long, impressionistic flurries or in shorter bursts of percussive power, or sometimes just a few delicately placed isolated notes, his role here is equally indispensable for producing this wonderful music. His expressive range on “Through the Forest” alone, with rapid single-note hammerings and cascading lower-register waves of sound, is captivating, especially as Laubrock offers her own fluttering commentary alongside him. One can only hope he continues to work within the improvised music community, as he clearly has a lot to offer.

Credit must also go to the folks at Intakt for the superlative sound quality on the record. With terrific instrument separation, it’s possible to hear all the nuances and subtleties of these musicians, each of whom relies as much on texture and feel as the notes themselves for expression. It’s obvious that this music was recorded with care, as is entirely appropriate given the unmatched artistry on display here. One of the highlights of 2017, to be sure.
Paul on Monday, April 17, 2017
Share