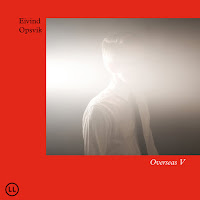 Bassist Eivind Opsvik, originally from Norway but living in Brooklyn for a number of years, has been slowly releasing a series of albums with the title 'Overseas'. Now on volume V, the group refines the more rock oriented sound that emerged on Vol IV, this time with a distinctive New Wave/No Wave intent.

So, no better place to do this than in New York City, home to the nearly mythic Downtown scene that spawned groups like Talking Heads, Material, Naked City, and - going a bit further out on the limb - Prime Time. While Opsvik's group is mostly a generation or more younger than the originators of the scene, the cast is replete with the current crop of downtowners (or mostly outer borough-ers, as downtown ain't what it used to be): saxophonist Tony Malaby, drummer Kenny Wollesen, keyboardist Jacob Sacks, and guitarist Brandon Seabrook.

The New/No Wave reference isn't meant to be taken literally, rather it's a jumping off point, and it's most prominent on 'Brapps!', a joyously avant-funk romp replete with a jerking repetitive rhythmic figure, a tight disco beat, and explosive horn playing - it gets my track of the year vote! Other places where the vibe can be felt is on opener 'I'm Up This Step', which is less funk inspired and more a fragmented melodic collage overlaid on a strong rhythmic foundation. 'Extraterrestrial Tantrum' takes on a different aesthetic, with what seems to be a vintage drum machine sequence at its heart. The group encircles it with thick open ended block chords from the piano, atmospheric guitar drones, and splashes of percussion. 'First Challenge on the Road' is a bit more of a rocker, but with a taught submerged funk rhythmic motif in place. Here, as on many of the tracks, the musicians serve the songs, as the layering intensity and melodic shifts is the focus, rather than individual soloists.

It's not all snappy rhythms either, for example the evocative 'Shoppers and Pickpockets' is an atmospheric piece whose diffuse melody slowly comes together only to break down into a textural piano passage. 'Katmania Duskmann' polishes things off with a final romp in the rhythmic playground - this time more metal than funk, the guitar finds itself deep in skronk mode.

Opsvik's Overseas collection is certainly an excellent chronicle of his journey and tenure in NYC, and volume 5 is deeply satisfying examination of some less explored avant-garde niches.