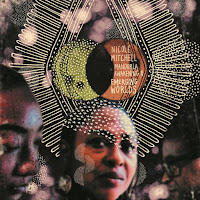 In 2099, a couple embarks on a journey to escape the decaying World Union society, and discovers the obscure island of Mandorla, whose inhabitants have created an egalitarian society thanks to their ability to communicate directly with the “Source”. The couple will need to choose between adapting to a different culture or face death by struggling to help their old world survive.

These are the intriguing contours of the science-fiction story created by Nicole Mitchell for her latest album, Mandorla Awakening II: Emerging Worlds. A virtuoso flutist, prolific composer and bandleader, Mitchell has been a mainstay of the lively Chicago avant-jazz scene for more than twenty years, before relocating to the West Coast, where she currently teaches in the “Integrated Composition, Improvisation and Technology” (ICIT) program at the University of California, Irvine. The band on Mandorla is a new configuration of the Black Earth Ensemble that appeared in Mitchell’s previous records, with the notable additions of shakuhachi (bamboo flute), taiko drums and shamisen (a three-stringed lute); traditional Japanese instruments that are employed for their beautiful sonic character but also for their evocative potential, hinting at distant cultures to conjure different and often contrasting atmospheres.

The album unfolds like a suite, revealing a complex compositional structure that, despite touching on a multitude of different styles, manages to always sound natural and immediately engaging. “Egoes Wars” begins with a sparse ambience of resonant gongs and metal percussions that gradually builds a strong rhythmic foundation for the theme, first exposed by Wing’s slashing guitar and then reprised by Mitchell’s flute and the strings, in contrast with Aoki’s funky bass line. “Sub Mission” is a miniature concerto for shakuhachi and shamisen, full of dramatic tension. “Dance of Many Hands” begins with a joyous theme by flute and violin; after a brief taiko interlude, a completely different melody appears, austere and lyrical, finally leading to a magnificent cello solo by Reid. On “Listening Embrace”, cello and drums delineate a hip-hop rhythm as the base for a first theme exposed by flutes and strings; an atmospheric section, dominated by shakuhachi and shamisen, introduces a second theme and incisive solo statements by flute, electric guitar and violin, in an exhilarating collision of different musical worlds.

The variety of narrative strands, expressed in a kaleidoscope of different voices, reminds of what George Lewis called “multidominance”, expanding on a theory by Robert L. Douglas: “According to Douglas, the aesthetics of multidominance, involving ‘the multiple use of colors in intense degrees, or the multiple use of textures, design patterns, or shapes’ are found quite routinely in musical and visual works of Africa and its diaspora.” (1)

The strong African-American foundation becomes even more evident in the last part of the album. The powerful vocal work by avery r young – between poetry declamation and soul singing – is the perfect vehicle for Mitchell’s lyrics, rooted in Afrofuturist aesthetics but inevitably linked to present day issues of social and racial inequality. As Mitchell explains: “I’m African-American, and I have a lot of anxiety living in this world today. Mandorla isn’t an altogether ‘hopeful’ piece, though optimism peaks through at times. I tend to be pretty optimistic, because I believe humanity has the power to co-create its future.” The music continues in the vein of the first part, brilliantly merging the language of avant-jazz with rock and funk; but with a more urgent edge, using simpler themes and structures that immediately captivate the listener, without losing their adventurous character.

Mandorla Awakening II: Emerging Worlds is a brilliant album, an impossibly beautiful work of art that conveys a necessary message of resistance, fighting for change and freeing one’s mind through imagination and music.

It's rare that I preorder albums on bandcamp, just because it's frustrating to purchase something and then have to wait for a fairly arbitrary release date. But I plopped down some money for this because I'm super intrigued by it. I'm glad to hear that it's worth it!

woud love to buy it, it is really intriguing but postage to UK - £20 kills.