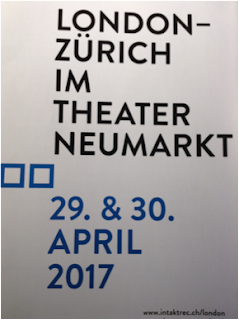 In 2012 the Swiss Intakt label hosted a two-week-residency with some of their artists at The Stone in New York City. The row of concerts was a real success, which is why the label planned a similar event, this time in London’s The Vortex. Scheduled around Barry Guy’s 70th birthday on April 22nd, there were 26 bands/solo performances over twelve consecutive days, starring artists like the Howard Riley Trio, Schlippenbach Trio, Omri Ziegele’s Where’s Africa and many others. Although it was a huge effort to organize the London shows, Irène Schweizer and Omri Ziegele suggested some form of an appendix in Zurich, presenting line-ups with a London - Switzerland connection.

Due to Irène Schweizer and Omri Ziegele being local heroes, the first day at the Theater Neumarkt was almost sold out and the festival started with Schweizer (piano) and Louis Moholo-Moholo (drums). The two have known each other since the early 1960s and recorded excellent albums for FMP (Messer and Tuned Boots, both with Rüdiger Carl on saxophone). In 1986 they played as a duo at the Zurich Jazz Festival and their music protested against the collaboration of Swiss banks with the South African apartheid regime. The concert was later released as one of Intakt’s first CDs. At the Theater Neumarkt, their opening set moved from longer, excessive pieces, which could be understood as a reminiscence to their riotous past, to miniatures towards the end of the gig. Their improvisations danced around Schweizer’s melodic lines, which Moholo complemented with his stoic and tender style, especially on the cymbals. However, the highlights of the set were when Schweizer’s changed to Tayloresque clusters or gloomier passages from which she culled little tunes. The duo had to play three encores, one quoting “Angel“ from their 1986 set, which made the audience almost freak out. 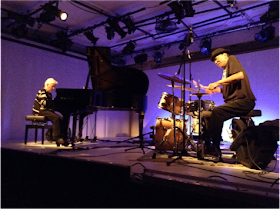 After this rather accessible set, Evan Parker (tenor saxophone) and Flo Stoffner (guitar) were harder to digest. Stoffner's way of playing was reminiscent of Derek Bailey, he tore the strings and used staccato chords and harmonics, which gave Parker the possibility to present the whole range of his impressive technique. The central element of their music was a certain unevenness (not in a negative way), which was regularly interrupted by floating passages, often instigated by Parker’s circular breathing technique. The two played a real duo set, there were no solo parts. All in all, this was improvised music as it should be: communicative, challenging, subtle. However, some people left the room, obviously, it was a bit too disturbing for them. 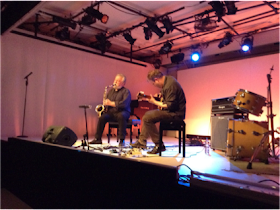 The highlight of the first evening was the trio of Omri Ziegele (tenor saxophone, flute, voice), John Edwards (bass) and Mark Sanders (drums). Ziegele composed a theme for the band which bookended the set and it was interesting to see Edwards and Sanders dealing with a notated part. The trio included lots of different musical styles (in general a central aspect of the festival), which referred back to Schweizer/Moholo-Moholo and foreshadowed Ingrid Laubrock’s Sleepthief. Their unique feature was high speed, both relentless, energetic and soulful at the same time - something Edwards and Sanders are famous (or notorious?) for. They generated many of layers of sound and Ziegele responded with wide and open lines. When he changed his strategy and went for speed as well, the set provided moments of sheer expressivity and excitement. This basic pattern was ruptured by different excellent solos: first Ziegele played the flute and improvised lyrics in the style of the Beat Generation, then Sanders contributed a very light-footed drum solo and finally Edwards proved that he is one if the most creative bassists on the scene, bowing his head to the great Barry Guy’s "all-over-approach." 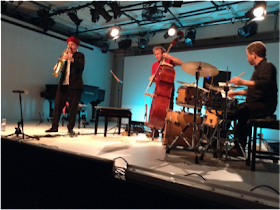 As to the surroundings, the second day was very different, only about 50 people attended the show - and to cut a long story short, they missed excellent music.

The evening was started by Evan Parker and Barry Guy, always a perfect match. Both have known each other since the big bang of British improv in the 1960s, they’ve played together in lots of constellations (in the Evan Parker Trio or Barry Guy’s London Jazz Composers Orchestra, to name just the two most famous ones), as a duo they released Incision in 1981 (on FMP/SAJ). Their nearly patented individual styles have become free jazz history and so it was no surprise that they didn’t need time to warm up to come to the point. Both played marvelous loud/quiet passages, especially when Guy’s overtones met Parker’s circular breathing. Or, as Parker once put it: "Effectively, we're just machines turning sunlight into music." Their music was full of meticulous details about the idea of communicating and both deployed a musical empathy, which was simply sensational - even after such a long time of playing together.

Some of the people in the audience came just for the two old masters, which is why the final concert, Ingrid Laubrock’s Sleepthief with Liam Noble on piano and her husband Tom Rainey on drums, took place in front of just 30 people. However, like the people who left the Woodstock festival before Jimi Hendrix’s concert, they missed the best of all gigs.

The trio was the exception to the rule since there is no Swiss element in it (Laubrock was born in Germany). Like Schweizer/Moholo and Ziegele/Edwards/Sanders Sleepthief also presented a whole range of musical styles, in their case free jazz, classical music, blues, swing, modern jazz etc. Often the musicians blended musical ideas smoothly, e.g. in the first piece when Noble played a series of filigrane runs and Rainey and Laubrock tip-toed elegantly above them. When Laubrock changed her tenor for the soprano sax, Rainey played the most minimal drum transition I’ve ever heard (with mallets and the palm of his right hand) so that Laubrock and Noble could easily find their way into the next part. Above all, the trio was just great in creating different kinds of atmospheres. The icing on the cake were two Ingrid Laubrock solos, one very expressive in the first piece, the other one at the beginning of the second track, when Rainey and Noble just listened. Here she was unusually bluesy, with a lot of overblown notes, very vibrato-drunk. However, typically Laubrock, she was also abstract and digressing. It was my favorite solo of the festival (together with Edwards’ and Sanders’ ones the day before). In the last part of the concert the trio went full blast and paid tribute to Cecil Taylor's legendary trio with Jimmy Lyons and Sunny Murray. A worthy finale - for the gig and for the festival. 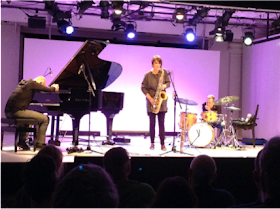 All in all, London - Zurich was a very coherent and well-curated festival. A nice side-effect was that  it presented three very different drummers, each of them a real treat. The venue, the Theater Neumarkt in the middle of Zurich’s old quarter, was beautiful and full of friendly people. Even the weather the great. I wished I could have been in London to watch the other bands.

There is no video footage of the festival but if you want to get a glimpse of the bands, you can check the following links:

Have a look at Sleepthief here: