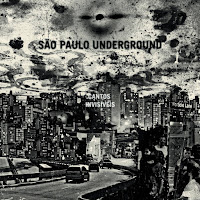 Composition credits are mostly split between Mazurek and Takara, with the two sharing credit on the massive bookends, opener “Estrada Para o Oeste” and closer “Falling Down From the Sky Like Some Damned Ghost.” Although, admittedly, it would be difficult to tell where composition ends and improvisation begins, as all four members are clearly contributing huge amounts to the progression of each track. “Estrada Para o Oeste” begins with slightly contrasting electronic and keyboard lines, and a processed drum track that rises and falls in the mix. Translating to “Road To the West,” the song has a somewhat oceanic feel, as if tracking a galleon traversing the Atlantic. Just after the mid-point, Mazurek plays a lovely, bright line on cornet, which gets processed and chopped, as the rest of the band plays at speeding up and slowing down the tempo. But it’s the way the group shifts so easily into a unison chant, underlined by dozens of earthen percussion instruments, that highlights how well São Paulo Underground encompasses a universe of sounds within itself.

On “Cambodian Street Carnival,” this blend of analog and digital keyboards, samplers, and acoustic instruments (you could call it “ancient to the future”) takes a celebratory spin through the streets. “Lost Corners Boogie,” one of the album standouts, opens with contrasting keyboard lines that continually reassemble themselves, like a living Rubik’s cube. About two minutes in, Takara begins laying down a two-step rhythm as the keyboards start playing a melody in rounds, alternating with improvisations on the theme. The resulting hypnotic groove is absolutely delightful and segues effortlessly into the brief interlude “Desisto II.”

“Olhaluai” and “Of Golden Summer” have the group alternating bright and upbeat with languorous and contemplative. Then comes “Falling Down From the Sky Like Some Damned Ghost.” The layered suite showcases Takara’s loose drumming, which carries the bulk of the tune. Mazurek’s muted cornet in the final minutes are revelatory, some of his finest playing. Something that’s always struck me on past São Paulo Underground albums is the level of sincere emotional engagement with the audience; as much as titles and themes of Mazurek’s work tends to indicate a man of interstellar bent, I find him to be an astonishingly humane performer, making music dense with emotional complexity. Cantos Invisíveis is, for its many electro-acoustic trappings, a grounded album of deep feelings, impressionistic collages, and bold improvisation.

Available direct from Cuneiform on Bandcamp.