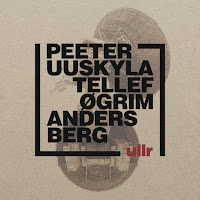 In Norse mythology, Ullr is usually depicted as a cryptic god “of snowshoes, hunting, the bow, and the shield.” So what strange motivation pushed drummer Peeter Uuskyla, guitarist Tellef Øgrim, and bassist Anders Berg to title their new record in his name? Perhaps it’s just a serendipitous result of the Scandinavian trio’s game of free association. Or could it be that Ullr is here to reveal an additional dimension of the deity’s symbolism, identified by some accounts as the god of duelling. The music on the record – boisterous and contained, silent and maniacal – suggests as much through a constant constructive tension between the players and a sense of confrontation that outlines the six intriguing cuts.

Take the opening “Disembark then Board,” for example, which rolls in with Uuskyla’s powerful, machine gun drumming that messily entangles Øgrim’s disjointed fragments of bluesy riffs and Berg’s bass twirls, swishes, and drones. It’s an energetic tune with allusions to a rock foundation disassembled and thrashed around an improvised framework. The flow of the track is nonetheless surprisingly stable, rhythmically anchored to Uuskyla’s vociferous drumming. The tense, aggressive mood brought on by the first track is partially dispelled on the second, “Ullr,” which is bare and simple, almost minimalist. It’s a song defined by Berg’s bass chugging and burrowing, resembling a caterpillar escaping its pupa, his tone reminiscent of Bill Laswell’s bulbous, distorted instrument. Meanwhile, Uuskyla will replace his drums for percussive elements on “Lusk,” steadying things even further and pushing Berg and Øgrim to the forefront while they create a seductive and pulsing breeze.

But it’s somehow always Uuskyla’s often spastic drumming style that dominates the proceedings, touching on the rapturous, bordering on the chaotic, even on slower cuts such as “By the Southward Verging Sun.” It’s not surprising then that the centerpiece of the record, the twelve minutes long “Shine Your Soul,” is also propelled by rhythm – first by firm handclaps, then by a sparse but long winded drum “solo” – and all the while haunted by a constantly rising tempo. Here Uuskyla provides a swooshing backdrop for Berg’s intermittent bass punctuations and Øgrim’s isolated, squeaky and nervous guitar riffs. It makes for a riveting, hypnotic piece. As this epic fades, two shorter, to-the-point tracks take over and close the album. Out of the two, “By the Southward Verging Sun” is especially soulful and calmly beautiful, formed as a dismantled ballad.

Emerging parallel to a very productive Scandinavian free jazz and improv scene, Uuskyla, Øgrim, and Berg end up doing their own thing. Contrasting the stylistic traits exhibited by some of their peers – Trespass Trio’s contemporary jazz sensibilities or Fire! (Orchestra)’s progressive approach – the trio’s music is an oblique and deconstructed but red-hot mix of jazz, rock, and several other styles in between. As a whole, Ullr is an engaging, captivating, and often unrivaled listen.