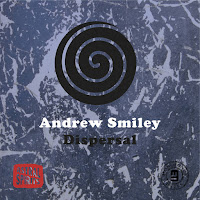 As much as releasing a solo album represents an act of bravery, it happens often enough that the distinction has dulled a little since, say, For Alto. But even Braxton’s first (and still astonishing) solo statement wasn’t quite his debut as a leader. The solo debut album is something rarer—and even braver. With Dispersal, guitarist Andrew Smiley joins the likes of Wadada Leo Smith and, perhaps more to the point, Keiji Haino, in a lineage of creative musicians who dared to debut alone. Of course, like Smith’s, Smiley’s first album under his own name follows on the heels of an already impressive resume of work in other leaders’ groups. We’ve heard him, for example, on Little Women’s last two releases; on the Chris Pitsiokos Quartet’s One Eye with a Microscope Attached; and on Will Mason’s own ambitious debut, Beams of the Huge Night (he also makes up one half of guitar section of the drummer’s band Happy Place). But Dispersal marks something of a shift—perhaps a release—from these groups’ often forbiddingly technical and tightly structured sounds; unlike Mason’s grand and expansive Beams, Smiley’s debut is compact, intimate, and raw—all qualities that suit it perfectly to an Astral Spirits cassette.

None of that’s to say that Dispersal doesn’t depend on technique or structure for its emotional power. Spanning 27 minutes, the piece takes a vaguely narrative shape as the conflict between its various counterpointed elements—voice, tone, texture, and rhythm—plays out. To create the drama he does, Smiley relies not on special preparations or effects but, as he notes, simply on his fingers, pick, and voice. It’s this in part what lends Dispersal its overwhelmingly personal and physical character. Particularly during the piece’s chaotic sections, listening to the intensity of Smiley’s playing it’s almost possible to feel the strain in your own hands. Of course, testing your technical boundaries this way entails a certain amount of vulnerability, especially when you’re the only one on stage. But as with Smiley’s singing, which he himself calls “very basic and limited,” the correlation between technique and emotional effect isn’t straightforward. A better singer—hell, even a better guitarist—couldn’t hope to produce more “perfect” results.

The piece begins in balance with guitar and vocal tones sounding in patient alternation, equally pure, and develops from there into a simple but beautiful counterpoint. It’s not until three minutes in that the first hint of trouble, an abrasive sour guitar note, sneaks in. At the same deliberate pace, tension mounts as Smiley pits rhythmic and textural complication against clean guitar and singing. While there’s a certain improvisational looseness to his playing moment to moment—partly an aesthetic choice, partly an effect of the way he pushes himself in places to the extremes of distortion and speed—it would be a disservice to the guitarist to underestimate the control required to orchestrate Dispersal’s epic cycles of calm and chaos.

“During the years in which I was developing this music, I spent a lot of time thinking about wolves, and feeling empathy for their struggle to live alongside humans,” Smiley says. “I would like this release to bring awareness to the intelligence of wolves, and their right to exist within ecosystems.” At the cost of all the various experiences and reactions this music has the potential to inspire, it would be too easy to read a man vs. animal program into this dedication. But it’s somehow heartening to find that through the end of the album, Smiley’s voice—his actual singing voice, innocent and imperfect—survives the six-string onslaught. Whether it’s for wolves or not, a note of hope is what we need right now.