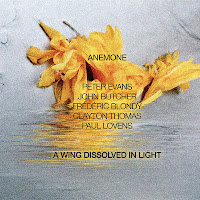 According to Cecil Taylor’s famous dictum that a composition starts with the selection of the musicians, ANEMONE are an obvious and promising match - at least if you have a closer look. The quintet consists of English saxophonist John Butcher, US trumpeter Peter Evans, veteran German drummer Paul Lovens, Australian bassist Clayton Thomas and French pianist Frédéric Blondy - players who come from five different countries (even three continents) and span several generations of improvised music.

Apart from their differences as to age and the fact that it’s hard for them to meet, it’s their interest in sound excursion and their exquisite technique what they have in common. Butcher has often experimented with the locations he played in (e.g. caves, oil tanks, mausoleums) and with multiphonics, Evans is a master of special effects (what the New York Times once called “a bonanza of texture and timbre“), Paul Lovens, who has played in a quintet with Butcher before, on the excellent News from the Shed album (with John Russell, Radu Malfatti and Phil Durant), sees percussion as collection of timbral colorations, with sound drawn from selected and unselected drums and cymbals (meaning that he uses material he’s taken with him or which he’s given on location). Finally, Clayton Thomas’ approach is obviously influenced by Barry Guy and Peter Kowald, he often puts bars, mallets and license plates between the strings, while Frédéric Blondy’s piano style is a lucky bag of sounds using every component of the instrument in an unorthodox manner.

Then you put on A Wing Dissolved In Light, their first album, which was recorded at the 2013 Tampere Jazz Happening, and you’re surprised: The piece starts with first-class old-school free jazz. John Butcher shines with controlled overtones, bird chirps and alienated sounds, Peter Evans gets lost in a whirlwind of eccentric tones and circular breathing on his piccolo trumpet, Lovens propels the two providing a consequent cymbal pulse, Frédéric Blondy supports Lovens with isolated Taylor chords, while Clayton Thomas’ hectic bowed bass adds fuel to the fire.

But above all, A Wing Dissolved In Light is a constant twist and turn, the music is permanently moving in different directions as to sound and dynamics. It slows down and explodes, especially in the quieter parts the musicians delve into sound explorations, their different approaches blend into one great collective effort. Indeed, there are wonderful moments, for example the duo passage of Evans and Thomas, who are joined by the others at an incredible speed, the almost classic piano trio part, and Evans’ and Butcher’s squeaking and gargling dialogue which prepares the ground for a tender and melancholic break. Here and there the music is reminiscent of an extended version of the Schlippenbach Trio because of Paul Lovens’ subtle control of things and John Butcher’s saxophone, which is sometimes close to Evan Parker’s style.

A Wing Dissolved In Light is a very delightful and fascinating album for fans of both European improvised music of the 1970s and those who are interested in disregarding the apparent limitations of the instruments used in this band. It’s been one of my favorites in 2017 so far.

A Wing Dissolved In Light is available on vinyl in a limited edition of 500 and as a download.

You can buy it from the label www.nobusinessrecords.com and from www.instantjazz.com.