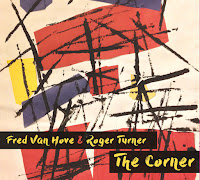 Projected on the wall of the gallery at the Haus Der Kunst in Munich for the FMP exhibition was an electric 1974 performance of a brawny young Peter Brotzmann on sax, a mischievous Hans Bennink on drums, and an intense Fred Van Hove on piano. This for some reason came to mind as I was listening to this incredible duo recording from a concert at London's venerable Cafe Oto in late 2015. Though missing the powerful winds, there is the same intensity and focus from Van Hove and a similarly sympathetic collaboration by percussionist Roger Turner.

Turner has long been a main stay in the British improvised music scene, for example, working closely with folks like Lol Coxhill, Phil Minton and John Russell. Van Hove made his mark early on in the first generation of European avant-garde musicians and is renowned for both his playing and teaching. Turner and Van Hove first played together in 1983 and their long association can be discerned easily on The Corner. Turner's supportive playing is well matched with Van Hove's probing and voluminous drive, and is perfectly in tune during the introspective moments. Both of which occur amply during the 26 minute opener 'Life Dealers'.

The duo's repartee is in fine order from the get-go. For example, about ten minutes in, moments of light pianistic whimsy meets Turner's crisp percussion and the two instruments begin pushing each other to extremes. 'Shopped', the second track, is a concise seven minutes and begins on a more tenuous and mysterious ground than the exuberant opener. Van Hove's chords are bright and welcoming, but unusual. Their intrigue emanates from their lush and unique voicing.


The duo's dramatic dynamics are certainly present on the twenty minute 'The Hat'. Van Hove has all the pedals pressed as he builds a wall of sound that we would all happily pay for. This track ends with Van Hove suddenly dropping out, giving Turner a few moments of skittering solo percussion alone time. Van Hove eventually rejoins to bring the epic to a close. The last track, 'More Light' is another terse follow up. Where the previous tune was a dense construction, this one is structurally light and open, like a sweet digestif after the heavy aural meal.

The night of music at Cafe Otto must have been a real treat for those who had a chance to attend. Fortunately Relative Pitch has given the rest of us the opportunity to experience it as well. Who knows, perhaps some 40 odd years in the future, at some exhibition of 21st Century Avant-Garde, a visitor will be treated to the visage of the august Van Hove and feel the music still reverberating from that long ago concert too.

Regardless, it's pure exhilarating - get it, enjoy it!