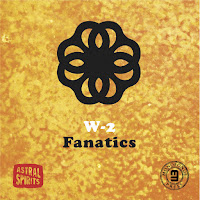 Harsh, dense, uncompromising—it’s a shame we ground these descriptors into cliches before W-2 hit the scene. They won’t do us much good here, since falling back on the familiar is the last thing the Brooklyn-based synth/sax duo of Chris Welcome and Sam Weinberg is about. No, Fanatics is a work of constant invention, forty-eight blistering minutes of wide-awake improvised interplay. Like any machine left running on high, the album gives off a heat that teases the boundary between pain and pleasure, happily warm and white hot. Yet with this latest installment in their discography—their third album in this specific vein since just March of last year—the duo seems unlikely to burn out any time soon.

Whether the listener can keep up is another question, though what stake Weinberg and Welcome feel they have in the answer isn’t necessarily clear. Any attempts to boil the music down to simple emotional effects—anger or primal aggression seem obvious—are as unconvincing as the tired adjectives above. Instead, despite the urgency and immediacy of the music, there’s a self-consciousness about Fanatics that introduces a certain kind of distance into the proceedings. Perhaps it starts with the title itself: calling the album Fanatics spins the perspective on the duo’s fanatical improvising, pointing straight at it and casting a shadow of knowing performativity over a genre that’s so often celebrated for being “raw” or “authentic.” Track titles like “Beige and Distrustful” and “Decisive Profanity” suggest that Fanatics may be designed to disrupt, to shock by premeditation rather than by spontaneous enthusiasm. Even the pace at which they’ve been releasing material seems part of the act. And at a certain point, track after track, album after album, the unending intensity starts to feel almost like a test of sorts, if not a prank, pushing the limits not so much of what music can be or of what instruments can do, but of what even die-hard free jazz fans—that is, fanatics—will claim to enjoy.

Now wait: none of that’s to say that this album doesn’t test musical and instrumental limits (it does) or that no one will honestly enjoy it (I certainly do). After all, any effect or commentary—intended or imagined—would be dead on arrival if Weinberg and Welcome weren’t such formidable instrumentalists and improvisors. W-2 is a perfect name for the duo not just because it sidesteps some unwieldy alliteration but also because it encapsulates their incredible ability to “double” one another. Part of the magic is in their way of matching and complementing each other’s voices, from the earsplittingly shrill to the gutturally grating to the digitally gritty. But along with that, of course, comes good old-fashioned listening. Weinberg and Welcome respond to the second-by-second unfolding of each improvisation with ultra sensitivity, deftly chasing each other around every sonic corner. Listening closely, though, it’s actually not that hard to pull apart the strands, isolating Weinberg’s sometimes surprisingly melodic saxophone from Welcome’s nightmare video game stylings. Does doing so diminish the overall effect the duo is so skilled at crafting? Maybe, but perhaps that’s part of the point: to find in deconstruction a source of wonder.