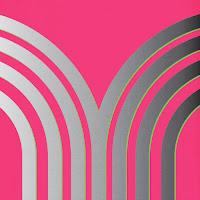 Chet Doxas' Rich in Symbols has just been placed into my guilty pleasures playlist - but it's not one to feel guilty about at all, it's just so rich and flavorful that there is no way it can be good for me.

Brooklyn based Doxas works often with trumpeter David Douglas (who has a guest turn) and plays saxophone and synthesizer - the latter of which plays an important role on this album. Helping to bring Doxas' vision to life is Matthew Stevens on guitar, Zack Lover on bass, and Eric Doob on drums.

For Rich in Symbols, Doxas draws inspiration from the art scene centered around the Lower East Side / East Village in the early 1980s. Close your eyes and imagine works by Nan Goldin, Robert Mapplethorpe, Fab Five Freddy, Futura, Keith Haring, Jean-Michel Basquiat, and Robert Longo as the uplifting opener plays.

The straight ahead beat, pulsating rhythm, and anthemic melody of  'While You Were Sleeping' is set to bring you back to a time that perhaps only exists in hazy retrospect, but still captures the zeitgeist of a scene in its prime and not yet beset by death and gentrification. The following track, 'Starcrossings' (see video below) is another example of synthesizer flair, a firm modern jazz/rock melody and a deliciously spiky guitar solo from Stevens.

Doxas' musical aesthetic is fairly well set, all tracks feature excellent and well thought out playing, but they also tread a similar sonic landscape: lots of open spaces and elongated melodic lines. However, this is also not entirely true, as for example, 'Hot Ones' is an exciting departure with some driving rhythms and a bright quick theme. Finally, the closing track 'We Made a Lie Together', features one of Doxas' most vibrant solos.

Rich in Symbols is a fun album and interesting musical tribute to a period of creativity that seems to be coming more and more into focus.