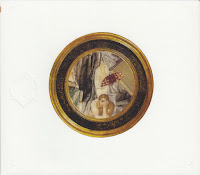 
The first time I came across the name Ikue Mori was with her collaboration with Sonic Youth (as was the case with many unfamiliar to me names and music, i.e. Mats Gustafsson, Merbow etc.)

A few years later, Sonic Youth was history, and I went to a concert on the roof of a museum (very nice evening!) by Body/Head, the duo of Kim Gordon and Bill Nace. On that evening they had a special guest: Ikue Mori. The strange thing about all that is that I was surprised to see that Ikue Mori was a woman. I am not very familiar with Japanese names and still it is telling a lot about me or my expectations on music and musicians. Without giving it a second thought I had expected a male artist. The music that evening was beautiful and I would say especially because of the participation of Ikue Mori.

The music we write about in this blog could be described as avantgarde (more or less). But still there are mostly male artists and my own expectations confirm that. Does Ikue Mori's gender change my perception of her music? I don't think so. Maybe it is just high time to listen to female artists in particular and highlight their approach.

Highsmith is a good example to do so. The duo of Craig Taborn on piano and Ikue Mori on electronics is exactly that - a real duo. Often electronics are an element used to add a little atmosphere or some odd sounds and little surprises, but not with this album. The two artist are, as I said before, a real duo. They are on an equal footing with each other. And that you can hear!

The piano of Craig Taborn and the sounds of Ikue Mori are a perfect match. For example the first track "The still point of the turning world": it starts of with a perfect mingling of the two as Craig Taborn plays short open chords. The piano sounds as if it was excited to meet the strange and wonderful electronic sounds that not only fill the gaps between the piano's chords but have a life of their own. I hope I don't wrong the two artists but while listening to the first track I had the image of two young dogs in my had jumping excited around each other, happy to meet each other.

The second track "music to die by" does not sound that "jumpy" at all. The piano is moving fast through the whole fingerboard accompanied by high clicking sounds. It's an urgent and grave piece of music. The other tracks are different in mood, speed and sound. There are calm tracks like "nothing that meets the eye" on which Ikue seems to lead the duo. On other tracks the piano seems to lead. But never does the one dominate the other.

It is probably not fair to compare two duos, but in preparation for this review I listened to another duo with Craig Taborn. It was Lubljana with Mats Gustafsson, and the whole approach is different: Mats Gustafsson and Craig Taborn improvise a whole set, separated in two sections. The tracks on Highsmith are improvised as well but short as pop songs with one exception. And a sax may not be compared to electronics.

Still, I listened to it and heard a different piano, and with that in mind I return to the beginning of this review. Does Ikue Mori's gender change the music? Change the way Taborn plays? Actually, I don't know for sure. I know the album sounds different, the piano on the album sounds different than the piano on Lubljana with Mats Gustafsson. But maybe I just have to reflect my expectations about who is playing what kind of music. The album Highsmith in the end is one of the best combinations of electronic sounds and more or less a 'classical' jazz piano. And Ikue Mori is an artist worth following, even to the top of a museum. She challenged my expectations, made me reflect on my thinking, and with Highsmith challenged my ears in a very exciting way.