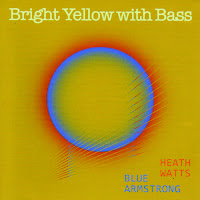 It’s always interesting, as it is puzzling, encountering an artist with no prior knowledge of him or her. I first listened to Heath Watts’ duo with Dan Pell, on the always wonderful Leo Records, a few years back. I’ve listened to nothing from him before or after that. It feels like the pre-internet times, when almost all the info you could absorb came from the recordings themselves. Recordings just like a message in a bottle coming out of nowhere from someone you have never met. Quite exhilarating.

So, Breathe If You Can, the aforementioned duo recording, kind of worked as a guideline for me. While perhaps not being a masterpiece, it definitely made me love the soprano saxophone of Watts. His playing stood somewhere between the impressionistic view of the color of sound and an abstract image of a sound world. In both cases you had to give time, space, and a small distance, so you could enjoy its fruits. His breathing was like lush and big brushstrokes that leave a deep impression. This duality is a also mentioned and highlighted on the Leo Records’ website for the liner notes of Bright Yellow With Bass.

The recording itself is a gentle proposition. There are no special outbursts or blow-outs. Following their amazing interplay (having they been playing together a lot?) the music flows from one composition to the next uninterrupted. It’s like you hear one long track. They play in unison.

I pretty much like and enjoy the percussion qualities of the double bass. Those are quite fitting with the timbre of Watts soprano saxophone. As it happens with numerous combinations of reeds and percussion, this is a duo that cut its teeth –at least for this recording – by using the same fluidity of the aforementioned interaction.

Blue Armstrong’s bass isn’t limited only to accompany the saxophone. He is, through the instrument, an equal player, a strong participant and maker of the recording. This is what we get because of the long and fruitful tradition that’s comes out from free improvisation: equality in all aspects.

Melody and notes do not discriminate from each other. Even though Watts’ playing isn’t based on melody but rather in notes, this is a melodic recording and not, as I already mentioned, a rough blow out. Listening, I often found myself focusing often on the double bass. The plinks and the plonks, the notes and the tonalities of Armstrong’s bass constitute one of the best proposals for this instrument in 2017.

One more hard fact as this review is coming to an end: the more I listened to this cd, the more I came to appreciate it. Do yourself a favor by doing the same.