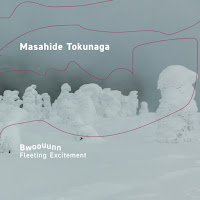 Very few musicians can be said to truly be doing something original and unique, especially when it comes to acoustic instrumentation, but Japanese alto saxophonist Masahide Tokunaga continues to exceed all expectations. Tokunaga performs in a language which is solely his own, and Bwoouunn: Fleeting Excitement may be his definitive solo document. Bwoouunn is Tokunaga's third solo album, preceded by 2009's Alto Saxophone (released on Taku Sugimoto's Slub Music) and 2015's Alto Saxophone 2 (also released on Hitorri). Alto Saxophone 2 was what made Tokunaga stand out as a true original, to me, although the album sadly got little attention elsewhere. Alto Saxophone 2 was comprised completely of long quiet tones which would make gradual shifts that the listener might struggle to notice. Bwoouunn refines upon the style of Alto Saxophone 2, but also introduces several new styles which all fit into Tokunaga's reductionist vision.

The first track, Seeking the Future in Vain was recording on June 26, 2016 by Samuel Dunscombe. The track starts off with quiet tones which assemble themselves to form a sort of pseudo-melody. Under many of the tones one might hear the accidental sounds of Tokunaga's blowing, which combine with the tones to make an odd sensation. Another oddity in this track is the vague sense of form. It essentially consists of a linear build, but in occasionally fading away all expectations of progression are subverted. In the climax of the piece, Tokunaga releases a brief series of shockingly loud high tones. These high tones sound awkward and accidental, although I'm aware that Tokunaga has full control. It's much subtler than the typical explosion that may grace an improv track. First of all, it's undeniably challenging – it's such a traditionally ugly sound that the listener can't help but wonder why a professional musician would want to make such a thing. Secondly, it's loud – much louder than the rest of the piece. For the rest of the piece, the listener is stuck with this massive conflicting focal point in their mind. To me, it feels like a relief to hear a sound of such an off-putting timbre, especially in the middle of a lovely improvisation. It feels like one important man raising his voice amongst a worried crowd, or a simple reminder that free improvisation continues to contain its own rules, or even just an expression of an emotion which is not readily understandable. The rest of the track contains low tones which could shake a room if they weren't so quiet.

The following two pieces, From Seventh Heaven to the Abyss in an Instant and Again in Search of Hope were both recorded on May 14, 2017 by Hiroyuki Ura. Just as Seeking the Future sounded like a maturation on Alto Saxophone 2, which was recorded just 2 years earlier, these tracks recorded 1 year later sound like a maturation on it. That linear progression has left, and been exchanged for a higher degree of cautious mystery. The music is calm, carrying a floating quality which the title may allude to. Tones emerge from thin air with gentle fades and hold their place for as long as Tokunaga deems them to be necessary. Simple repetitions emerge and are forgotten. For long sections, Tokunaga decides to narrow his palette to avoid cross-polluting styles. He meditates on simple ideas, giving them much more space than other improvisers might, but he always manages to prove that the ideas do deserve those long durations.

Tokunaga's tone-based improvisation often reminds me more of an electronic piece or a performance of a Wandelweiser score than of any other acoustic improvisation. When hearing the tones, the most obvious thought is that they would sound lovely harmonized together. But Tokunaga doesn't combine recordings or write compositions, and he prefers to perform solo. In doing this, he forces the listener to pay more attention to the individual sounds and attempt to analyze what they may say, or if they say anything at all. Tokunaga is certainly more interested in sound than in music, in a traditional sense, so it does make sense for him to take this route. Despite these avant-garde aspirations, Tokunaga, even more than on previous releases, plays with clear emotion. The emotions presented are soft and at peace, so they may seem subtle, but they still manage to feel true. When I hear this, a strong sense of pacifist zen seems to come through my speakers. The first track, which as I earlier stated was recorded nearly a year before the latter two, seems to come from a different emotional place; I'd reckon that Tokunaga's emotional state was quite different during these two performances. Seeking the Future in Vain contains an anxiety which pollutes its serenity, along with some harsh negativity which seems to be battled against. I wouldn't claim that either of these recordings are more emotionally interesting than the other, but it's certainly interesting to compare them in this regard so I'm grateful for both of their inclusions.

The album is mastered by Taku Unami, which is likely no surprise for anyone following this scene or style of music. Unami continues to be a mastering master when it comes to these quiet albums (such as Hiroyuki Ura's Scores). It sounds so clear and subtle; quiet sounds are given a perfect amount of space and the loud sounds are punishing. Unlike other artists in post-production, Unami has no fear of letting sounds be barely audible; he likely even finds this beautiful, as his own music reflects. Of course, I couldn't hear any of these pieces live so I can't compare, but in my opinion, this is perfectly recorded and produced quiet music.

Tokunaga plays in a manner that is thoroughly departed from jazz or improvisation traditions; in fact, Bwoouunn seems to take little inspiration from anything other than his own earlier albums. Tokunaga has found a beautiful and unique style, and he's also found a way to honestly express himself within that. Bwoouunn feels like a culmination of this style to me, and, assuming (and hoping) that Tokunaga does release another solo album, I think that Tokunaga's future solo music will move in a very different direction. That is to say, I strongly recommend this album to anyone curious to hear a wonderful document of one of the most talented, unique and overlooked saxophonists of this generation.
Paul on Thursday, October 05, 2017
Share