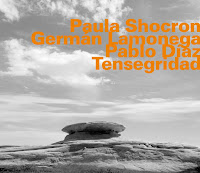 
I suppose it’s a bit of a conflict of interest to write this review since I also wrote the liner notes; however, since I've decided to barrel ahead anyway, I am going to further transgress and paraphrase liberally from the notes I wrote for the album. When I started on them, I took the opportunity to do Q&A's with the SLD trio's pianist Paula Shocron, drummer Pablo Diaz, and bassist Germán Lamonega, and what came out was a story of believing in your art, making connections, and a lot of perseverance.


The SLD Trio is a group of young Argentian musicians, who along with a small, dedicated, and increasingly beset group of artists, are working to find a space for free improvisation in Buenos Aries. If you can, track down Jason Weiss’ excellent profile of the group and the Argentinian improvisational music scene in Wire 399. Here, you will meet two thirds of the trio along with other prominent players, whom are all interconnected … a term which brings me conveniently to the album's title Tensigridad. From the liner notes:


The term 'tensegridad' is the Spanish translation of the word 'tensegrity' - a portmanteau coined by the 20th Century inventor and visionary R. Buckminster Fuller, who in the 1960 combined the words "tensional" and "integrity". The term refers to the strength and internal cohesiveness of interconnected individual components. The pieces may or may not actually be connected directly, but they are a part of the web of interconnectedness that gives the whole structure its form and structure. A classic example of this term is the geodesic dome, a self-supporting structure that Fuller popularized.The term however, has traveled beyond architecture and into other disciplines like biology, where the term ‘biotensegrity’ is used to describe the body's muscular-skeletal system is a connection of muscle and bone that operates in a comparable manner.

This concept to me is an apt description of the self-supporting community that is so key to creative/improvised music scene. I met the trio of them a couple years ago when they were visiting New York (part of an annual pilgrimage) after their last album release Anfitrion. They have slowly been integrating and extending the New York improvisation music scene, performing in the city and inviting musicians to perform in Buenos Aires.

The album begins with Lamonega's solo bass introduction to the track ‘Vera’. His tone is rich, and the legato phrases and double-stops lay a strong foundation for his bandmates. When the other join, the piano’s hypnotic arpeggios and the solid pulse of the percussion generate a mounting intensity. Throughout, the motion is generated by the energy of repetition, growing every higher until it breaks, where at the end Lamonega is left alone, again, to end the track.

The Mal Waldron tune ‘Snake Out’ begins with Shocron concentrating on the piano’s lower register, her attack is sharp and determined. These are not delicate or tender melodies being expressed, rather the trio is making a bold musical statement. The interconnectedness of their approach is the focus here, and the intensity of the song is the result of years of close listening and strong reactions.

Skipping ahead, on the title track ‘Tensegridad’, Shocron is melodic and driving, the strident movement of the chords giving the song its geometric shape. A quick build-up ensues with Diaz’s drums follow along, reacting and ultimately reinforcing the angles, and finally hooking up with Lamonega’s brisk walking lines, which adds a heft to the captivating, and all to soon over, track.

While there are many other fine tracks to explore, like the humorous and infectious ‘Casa Rodante’ and the spoken word ‘Universe Tiene Sentido’, the track ‘Connie’- a tribute to Connie Crothers, the New York based pianist, composer, and educator who passed away in 2016 - is a heartfelt tribute from Shocron. The connection between these two pianists developed on the trio’s very first trip to New York several years ago, and the emotion that imbued Crother’s work has deeply affected Shocron. The track is the emotional highlight of the recording and the juxtaposition of intense feeling with quiet reflection is incredible effective.

This is a trio with a calling to reconnect and whether or not you buy into my interconnectedness blather, along the way, the SLD trio is making moving, creative, and thoughtful music and it’s well worth your time to get your hands on the CD or download. Please regard my conflict of interest as your gain.