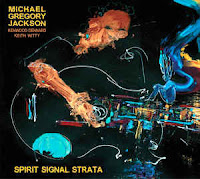 It seems that Michael Gregory Jackson is the best-kept secret of the free jazz guitar world.  Having played and recorded with Oliver Lake, notably on the albums Holding Together and the excellent live recording Zaki, MGJ (as I shall refer to him for brevity) has also produced a substantial back catalogue of solo work including the albums Clarity and the wonderful Gifts.  These earlier albums contained a much more avant-garde musical material, (although some might argue that Gifts was already moving toward a more straighter fusion sound), and focused on instrumental based pieces, whereas his later work moved into soulful song based compositions.  In recent years MGJ has released albums such as Liberty and After Before, which show a return to the emphasis on instrumental based pieces and his excellent improvised guitar playing that was such a feature of those early albums.  In Spirit Signal Strata we not only have a continuation of the exploration of this improvised element in MGJ’s music, but also as a guitar trio it contains the space for the music to really open up with his characteristic playing right at the forefront.

As a ‘live in the studio’ recording the playing has an edgy, fresh, and explorative sound to it, with all three musicians clearly carefully listening to one another due to the different sound textures that are created throughout the course of the album.  The first few pieces on the album have a more straight ahead feel to them including the beautiful slow blues ‘After Before (For K)’ originally from the album of the same name but this time arranged for the trio format.  Also from the same album is the fantastic ‘JcakJcak (for Ornette)’, a piece with a great head that moves between a hard-edged riff in straight time answered by a soft descending swung phrase.  What we get on the micro-level in this piece is explored on the macro-level with the overarching form replicating this idea with the improvised passages moving from a quick hard at it free-bop style excursion into a great laid-back funky groove after the return of the head.  MGJ lays down some lovely playing here, bluesy-based phrases extending into chromatic runs and punctuated with slightly dissonant chords.  After this we get an early piece of his, ‘Clarity 4’, taken from his debut solo album and given a slightly different feel by the nature of the trio.  The initial angular melody being explored by the group to great effect, with skittering rhythms from the drums, delicate bass harmonics, and volume swells from the guitar adding to the variety of sounds that are on offer in this piece.  ‘Spin’ is an interesting excursion into the use of synthesised sounds incorporating a squishy bass and a credible horn sound on MGJ’s guitar.  ‘Cortex Vortex’ also makes use of a breathy flute sound through a midi guitar set-up.  This is the longest track on the album at twelve-and-a-half minutes and starts with a pulseless soundscape of percussive sounds and bowed bass before picking-up in tempo and a delineating beat being introduced that gradually falls back into a slow groove, which MGJ makes the most of with some very explorative and free playing.

For fans of Michael Gregory Jackson’s improvised guitar playing this is the album that they’ve been waiting for him to make, with the guitar thrust to the fore by the very nature of the trio format along with pieces that are excellent vehicles for the jumping off point of improvised music-making.  With MGJ in such rich form let’s hope there’s more to come from this free jazz guitar maestro.
Paul on Wednesday, November 01, 2017
Share