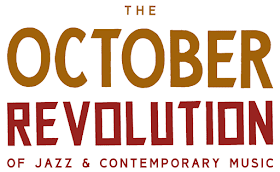 The October Revolution concert festival held Oct 5th through 8th in Philadelphia hinged its name on the seminal summit from October of 1964, organized by trumpeter Bill Dixon at an uptown Manhattan space, back when rents were low and revolution was in the air. That festival is considered one of the galvanizing moments for Free Jazz. Cecil Taylor, Sun-Ra, Burton Greene, and many others were involved with the music making and discussion panels.

Last week, located in and near the historic revolution-era old city (currently in a hyper gentrification revolution), this October Revolution was a thoughtfully curated event that showcased some established but very relevant acts like the Art Ensemble of Chicago and Anthony Braxton to energetic European upstarts Cortex and reps from the contemporary Chicago scene, and beyond.

The organizer, Ars Nova, has been instrumental in organizing concerts in Philadelphia over the past several years, and with this festival, they seem to have set the bar high for themselves. The concerts, while primarily centered at the Fringe Arts building at the base of the Ben Franklin Bridge near Penn's Landing, also extended into the old city on its final day with concerts at the historic Christ Church (where George Washington attended) and where the festival mingled with an old city arts and food festival.


The revolution started without me. I was in transit as Karuna opened the festival. The group featured percussionists Hamid Drake and Adam Rudolph, and multi-instrumentalist Ralph Miles Jones, and I was told, from some reputable sources, that it was an exciting concert.

However, I did get to see was the Sun-Ra Arkestra and band leader Marshall Allen impressed the hell out of me. At 93, Allen is still a force of avant-garde music making to reckon with, leading the group through Sun Ra's seminal album Space is the Place. While his EWI - used to invoke our placement in space - was a bit too loud, his saxophone was right on in pure skronk mode.

Singer/Violinist Tara Middleton, reed player Danny Ray Thompson, and trumpeter Michael Ray (I believe) provided a musical grounding along with stellar solos, while other members of the band helped to carry out the hi-jinx that the band is renowned for. It seems only the guy sitting next to me seemed disappointed that Sun-Ra wasn't actually performing - the overall assessment is that it was a lot of fun.


Friday opened with a 'secret concert' which I was delighted to attend. Upon entering Fringe Arts, we were herded through to the green room, where pianist Dave Burrell sat at the Steinway piano against an unfinished brick wall. He began with a standard, very straight ahead, very sweet. However, that is but one side of the rapidly swinging pendulum of his music, as without pause, the notes became ragged, punchy, abstract, only to be reigned back into harmoniousness a moment later. The gentle swing between in and out playing was mesmerizing, comforting and challenging in the same breath. Burrell played a mixture of his own compositions like 'Tear Drops for Jimmy', and the lighthearted stride piano laced 'Margy Pargy' as well as standards like his reflective take on John Coltrane's 'Naima'.

Following the set, Are Nova announced that the festival will be happening again next year, same weekend.


The first proper concert of Friday night was flutist Claire Chase who appeared in silver pants under blue lights on the darkened stage. On the sparse stage adorned only a table holding her flutes, Chase began with Edgard Varèse's 1936 solo flute piece 'Density 21.5'. The sparse melody was suspended in the room around her through rich ambient reverb and she effortlessly command the audience's attention with her dramatic sweeps and embodiment of the music.

The next song found Chase using a flute with a sliding embouchure hole (glissando head joint invented by flutist Robert Dick). From deep guttural tones to soaring notes, Chase augmented her playing with electronics to create a mesmerizing interplay of sound, motion, and light. Her multiphonic dreamscape expanded in the next piece which incorporated electronic concepts by pianist Vijay Iyer into the performance. Her penultimate piece involved members of the audience and Ars Nova staff, drawing them into a circle on stage and outfitting them with bottles and other small instruments. Chase, at first on pan flute and later the bass flute, instructed her 'orchestra' when to play and improvised over and around them. The final piece was an audience participation exercise from the late Pauline Oliveros. Chase's detailed choreography and improvisational prowess made for an impressive performance.

Like he was getting up to bat in game of baseball, reedist Anthony Braxton loosened his shoulders and adjusted his grip as he picked up his saxophone. He presented a series of key clicks before a tone even passed through the the instrument, but then his sound was alive - energetic and oscillating between quick runs and legato phrases. Braxton's playing is a rich biosphere, the deep fertile layers of the initial runs provide the foundation for the lighter layers of melody and fleeting asides. The music breathed, there was nothing anaerobic about it.

Braxton held his sax up high and arced his back slightly as he played, and the instrument seemed like a tool in his hands, being used to construct something special, he was not just playing. The audience was enthralled as he launched into the next piece, which began with a series of squeaks and throaty descending runs that brought the piece to a close. Braxton also delved into some standards, playing a lovely rendition of Thelonius Monk's 'Ruby, My Dear' and an ebullient version of the Miles Davis classic 'Four', which spawned variations of the melody that went out, remaining spiritually, if not thematically, connected to the tune.

A humorous moment occurred as someone who was recording on his iPhone accidentally clicked play. As if on cue, what Braxton just played was played back to Braxton, quite audible to all. Taking it in stride, Braxton cracked a joke and then pausing before his closing composition, acknowledged the broader political and artistic climate. "I don't need to tell you about how complex these times are," he said, "But there is nothing like creativity and positive energy to help get through it." And with these practical words and a the subsequent uplift of the final piece, the audience dispersed into the night, some pausing to enjoy the beer garden on the oddly warm evening.