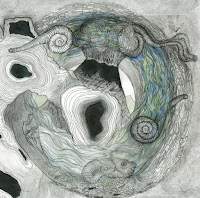 Way back in January 2015, Stef reviewed an album called Music for Church Cleaners, Volumes I & II, a recording of improvised pipe organ, performed in St Mark’s Church, Islington, in 2011. Released first in 2012 as a cassette, and later expanded in 2014, it’s a landmark recording, and in the ensuing years, Áine O’Dwyer has consistently one-upped it.

O’Dwyer’s latest, Gallarais, is out now, and it’s another incredible, gripping album. A member of the London Improvisers Orchestra, O’Dwyer has a unique improvisatory sensibility, expertly combining harp, percussion, voice, and ambient sounds to create deeply entrancing soundscapes. As with Music for Church Cleaners, the tracks are simultaneously impressionistic and distinct, marked by their individual shape and trajectory, but given to bold, fascinating shifts in mood and effect.
Of Gallarais, O’Dwyer writes, “Gallarais, or the Gallarus Oratory, translates into ‘church of the place of the foriegner’ or ‘rocky headland’. It is a funerary chapel which takes the shape of an upturned boat, and is situated on the Dingle peninsula, Co Kerry, Ireland, representing in this instance a touchstone for abstract heritage, and the expression of the female voice.” Recorded over two years, in the Brunel tunnel shaft (“50 ft in diameter and 50 ft deep with an acoustic decay of three to four seconds,” writes O’Dwyer), Gallarais shifts the focus of O’Dwyer’s interests very slightly, and dramatically changing up the instrumentation. “Underlight” opens the album with a three-minute meditation on harp, and it’s immediately followed by “Corpophone,” an a cappella melody that echoes away into the distant tunnel shaft. Later, the funereal impact of “Mrs O’Learys Keen” is particularly chilling. I’d recently read Katie Kitamura’s A Separation, in which a character visiting Greece from London, meets a professional funeral weeper. Kitamura evoked a woman plumbing the depths of her own pain in service of helping others mourn. Here, O’Dwyer recasts herself as an Irish keener, similar professional mourners, her voice not merely wailing but rising and falling, giving her vocals the overall effect of breath being taken away by sorrow.

In the time between Music for Church Cleaners and Gallarais, O’Dwyer released three more albums, the Fort Evil Fruit cassettes Locusts and Gegenschein, and the self-released Beast Diaries. Both cassettes were recorded on pipe organ, and all three are highly recommended.

Gegenschein pairs O’Dwyer’s 2014 limited-run “21.12.12” EP with “A world ending,” a 25-minute improvisation which features some fantastic overtones, especially in its first half.
Locusts is a collection of pipe organ improvisations, recorded in 2015 at both St James’s Church, Barrow-in-Furness, England, and The First Unitarian Congregational Society Church in Brooklyn Heights, New York.