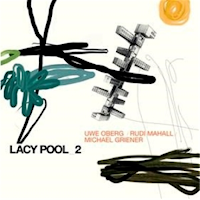 Back in 2009, pianist Uwe Oberg joined up with drummer Michael Griener and trombonist Christof Thewes to record Lacy Pool, a thoughtful and spirited treatment of a good portion of the Steve Lacy canon. By using a trombone player instead of a soprano saxophonist, Oberg made a deliberate decision to avoid the pitfall of sounding too derivative of the master, and the results struck just the right balance between homage and reinvention. For this iteration of the project, Oberg and Griener are teamed with bass clarinetist Rudi Mahall: a bit more Lacy-like, perhaps, in going with a straight horn (or at least a semi-straight one); but even so, once again Oberg and his partners have produced music that re-imagines Lacy’s pieces with creativity and poise.

All but two of the nine tracks are from the Lacy songbook. Well-known tunes like “Clichés,” “Troubles,” and “Trickles” contain all the quirky angularity and playful devices Lacy’s compositions are known for. Recurring motifs are featured prominently, along with ample opportunities for the musicians to move beyond the confines of the melodies. But there’s never a sense of complete abandon; as with Lacy’s own music, the melodic foundation of the songs is always implied. Indeed, so thoroughly do the musicians inhabit Lacy’s ethos that even their own pieces seem inspired by his muse: “Field (Spring)” generates a low-level intensity through a repeated phrase that Mahall develops through subtle re-workings before the group engages in a more fluid exchange of ideas, eventually to return to the central melody; and “Jazz ab 40” draws from Lacy’s love of Monk for a composition with an oblique melodic structure, with all three musicians hitting a creative peak in their tempestuous, wide-ranging improvisation.

The record’s appealing mixture of composed and semi-free aspects is definitely one of its charms. So are the players’ distinctive attributes. Griener is capable of stretching beyond the constraints of strict time, but there’s still a strong rhythmic core animating his contributions. Oberg also never ventures too far out, even during the music’s most unstructured moments; his sensitive, careful touch is central to his playing. And of course, as the horn player on the record Mahall is crucial: he consistently embodies the sing-song quality of Lacy’s music, but not without putting his own stamp on these pieces. He likes to stay in the upper register of his instrument, although when it’s needed he can harness the full range of the instrument as well as anyone. Listening to his beautiful take on “Blues for Aida” is proof enough of his and his partners’ skill in interpreting this very deep reservoir of music. It’s certainly enough to tide us over until the third volume of Lacy Pool; hopefully we won’t have to wait as long for that one.
Paul on Monday, October 23, 2017
Share