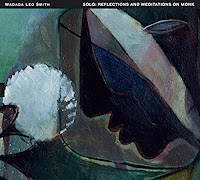 In a career spanning almost five decades, Wadada Leo Smith has explored every possible ensemble combination, from solo to orchestra and everything in between. Of all these performative dimensions, the unaccompanied solo is especially important. Smith’s first album as a leader, Creative Music–1, released on his own Kabell label in 1971, was indeed a solitary endeavor, and found the musician already working on what would become Ankhrasmation, a music theory and notation system that provides compositional accuracy while leaving ample room for spontaneous creativity. The solo dimension allowed Smith to investigate the boundaries of composition and improvisation without the external constraints inevitably present in an ensemble setting, in search of his own identity as a performer/composer.

Solo: Reflections And Meditations On Monk continues Smith’s personal exploration of the solo performance, but is also, in many respects, a real surprise. A multi-faceted reflection on Thelonious Monk’s music and personality, the record comprises four original compositions by Smith and four titles taken from Monk’s extensive catalog: Ruby, My Dear, Reflections, Crepuscule with Nellie and ’Round Midnight.

Even if always aware of the jazz tradition, and often referencing past masters in the titles of his pieces, Smith has usually focused on his own compositional work and has never recorded such well-known standards before. Moreover, as the trumpeter himself points out in the liner notes, Monk is not the first name that comes to mind when thinking about him. And yet, not only Monk has been an early model for Smith, the perfect example of the performer/composer he aspired to be, but many aspects of Monk’s distinctive style may be seen as the stepping stones over which Smith has built his own vision. An idiosyncratic view of rhythm organization, and the crucial importance of silence in shaping the musical discourse, are elements common to both, as is a certain attitude towards improvisation, where the tension between structural integrity and creative freedom makes for a constantly fresh and unpredictable musical experience. On a more immediate level, for both of them, there’s an instrumental voice so peculiar and unique that can’t be mistaken for anyone else’s.

Smith performs the four Monk’s compositions on this record with affectionate respect, presenting the themes in a simple, straightforward manner, while the following developments mark the distance between Smith’s inventive interpretations and any traditional jazz treatment. There are oblique references to the underlying harmonic structures and melodic contours, but the compositions are somehow observed from a distance, caressed and reconsidered, playing with a certain mood inherent in the pieces, while reaching a subterranean dimension that illuminates them from within. The results are breathtaking. Smith shows with disarming simplicity how every little sound, every subtle inflection can alter the perception of otherwise familiar compositions; how creative music can combine composition and improvisation in a seamless musical expression, free of technical or stylistic constraints.

The four original compositions that complete the album maintain the same feeling, and are among the best penned by Smith in recent years – and that is saying a lot, given the constantly excellent level of his writing. Inspired by films and images of Monk – the ring on his finger, the quirky dancing on stage – these pieces manage to evoke his music without openly referencing it, fully preserving Smith’s personality and compositional style.

More than a tribute to a beloved musician, this album is a profound, poignant meditation on the mysterious affinities between two masters of Afro-American music, and a refreshing reminder of how Avant-garde and tradition are indeed complementary aspects of the same musical substance.