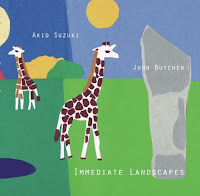 In June 2006, Arika, an Edinburgh arts group, organized Resonant Spaces, a tour through various isolated sites in Scotland and the Orkneys where sound artist Akio Suzuki and saxophonist John Butcher, individually and together, would interact sonically with some highly unusual environments, both natural and human-made: a cave, a windy beach, a reservoir, a mausoleum, an oil tank. John Butcher released a CD of his own pieces in 2008 as Resonant Spaces (Confront 17), one of the most remarkable documents of improvising in strange places. It’s just been reissued on vinyl (Blume 006, available through Butcher’s web-site [www.johnbutcher.org.uk], a tremendous resource for his work). I wrote about it when it was first released in an extended essay on site-specific improvisation. The piece is still available on-line, so I won’t go into detail here.

Immediate Landscapes presents five pieces from the 2006 tour by Butcher and Suzuki together, as well as a piece from the 2015 Ftarri Festival in Tokyo. Each of the tour pieces is a kind of complex sonic diagramming, the musicians interacting at once with the shifting possibilities of each site as well as one another’s materials. Each site is complex: an “event,” an instrument struck or blown (pitch, duration, etc.), will assume a different form depending on where it is directed. While Butcher employs his saxophones, Suzuki brings a host of devices, often common objects treated as sound producers: pebbles, glass plate, sponge, pocket bottle, brass plate, cardboard box, wood screws, bamboo stick, metal plate, noise whistle and his “voice analapos,” an echo instrument constructed from a coil spring and two iron cylinders functioning as resonating chambers.

These are examinations of emerging detail, materials reshaped, in some sense created by the environments, which have become musical instruments and unpredictable performers for these occasions. Even Suzuki’s instruments—those glass, brass, and metal plates—seem like elemental presences. Smoo Cave, near Durness, is a strange geological formation that includes both salt water and fresh water pools and a waterfall. In the recording, Suzuki’s sounds seem brightened, Butcher’s slightly muffled by the environment, as if they were being treated by different filters. In the Wormit Reservoir, with Butcher’s saxophone amplified, the musicians work with the different decays available in the abandoned underground structure. Butcher is the saxophone’s most intrepid sonic explorer (even playing saxophone in the Oberhausen gasometer on The Geometry of Sentiment), and Suzuki is an ideal partner, his whistles, rattles and scraped materials sometimes crossing into the same zones occupied by the saxophonist. The Lyness oil tank is a vivid percussion exchange, and perhaps the Scottish piece most resembling a traditional duet in the way in which the sustained collective response seems most independent of its environment.

The 33 minutes of strange Scottish places is balanced by the 27-minute duet from the SuperDeluxe night club (Suzuki’s instruments include swizzle sticks), with the two intently focused on developing an improvised duet in which the focus is on their own sound production. Butcher’s sense of development and Suzuki’s powers of invention come further forward in a wealth of detail that can verge of narrative, at times suggesting an extended dialogue between Australian fowl and particularly inventive human infants. Adjacent passages of pitch-shifting clicks can only be attributed with assurance when another instrument entering is definitely not a saxophone or a rudimentary percussion instrument. It’s a witty and mysterious collective adventure in which two masters create their own space.